How do you know when you're in love? 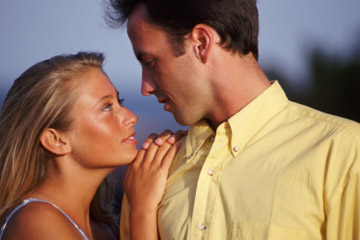 Is this the look of love?
David De Lossy/Valueline/Thinkstock

The Romans weren't far off in likening true love to getting shot in the heart with Cupid's arrow. Victims of the arrow went into a trance, comparable to a drug-induced euphoria. Those that have experienced true love know the arrow metaphor is very accurate. The signs of love are unmistakable.

Love Versus Lust or Infatuation

Lust is a product of physical attraction. It corresponds to sex and outer appearance. True love encompasses the whole of a person. Even when your partner gains weight, goes gray or becomes poor as a pauper, your love doesn't dry up. Love often deepens with time, rather than dissipates.

Infatuation is a nonsensical and typically short-term emotional high that causes a person to obsess about someone else. Left unchecked, it can lead to the unhealthy -- and even criminal -- act of stalking. Emotional surges are great but they are just that -- peaks that aren't sustainable and are, at their worst, one-sided. True love is mutual and lasting. Both sides of the relationship should be equally love-struck for it to blossom.

The Science Behind Love

Scientists believe that love is embedded in the mind rather than the heart. Love activates the release of dopamine, a neurotransmitter in the brain that makes you feel elated. According to neuroscientist Thomas Insel at Emory University, monogamous love triggers the same brain circuits as drug addictions to cocaine and heroin [source: Scientific American].

In fact, we're genetically inclined to choose a lover based on that ever-important first kiss. It's called the major histocompatibility complex (MHC), and it's a sequence of genes tied to our immune systems. Men release MHC in their saliva, and women choose men with a different MHC makeup than their own because less genetic overlap produces healthier children [source: Minnesota Public Radio]. So being stuck with Cupid's arrow may be as much scientific as it is mythological.

Even the coldest of souls fall in love. Once bitten, whether it's a product of compatible MHC or the release of dopamine, the side effects are undeniable.

Top 10 Marriage Myths
How to Build Marital Bliss
Relationship Counseling: Does It Work?