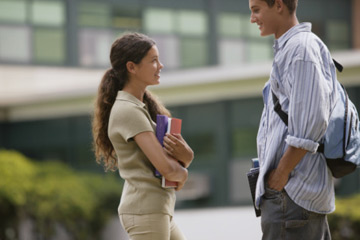 With a little bit of courage, you can come across confident.
Comstock/Thinkstock

A guy can be successful, nice, even funny, and still manage to strike out with girls all the time. It's frustrating and demoralizing when you don't know what you're doing wrong. The rejection is so discouraging that some guys just stop asking girls out. Many figure they'll have to wait for a girl to initiate interest in them. Others opt to make friends with women at first and hope they'll find the spark and the courage later. This, however, can be a recipe for disaster.

Experts agree: A guy needs to take initiative. Even in this modern, enlightened society, which tells empowered women that they can turn the tables and ask men out, a guy shouldn't wait for this to happen.

We've surveyed the advice of several dating experts about how a guy can improve his chances and get over the paralyzing fear of rejection. The key is to change your approach and your attitude. If your batting average for asking girls out is very low, you can likely improve your technique. And if you don't even have enough at-bats to constitute an average, well, it's time to try. And it'll be easier to muster the courage with the expert advice we've gathered.

Changing your technique doesn't necessarily mean changing who you are. Shy guys don't have to transform into slick, deceptive womanizers in order to land dates. Obviously, the ultimate goal is to find a girl who likes you for who you are. But that will mean learning how to impress her by showing the best side of yourself.

You can also improve your odds by recognizing and focusing on the girls who would be open to you. It's a subtle but effective game of reading signals and body language.

We'll explain these and other tips later in the article. First, however, let's explore the importance of thinking outside the box and non-traditional methods of asking girls out.

How to Ask Out a Girl You Just Met

Being smitten with a girl at first sight can deprive you of your common sense. You're probably going to be so nervous or excited that you can't rely on your own judgment to tell if the girl is open to you. So, it'll help to keep in mind some general points on body language.

Experts emphasize the importance of eye contact. One method is to casually make eye contact with a girl across the room. If you catch her eye, offer a warm smile and hold for a second. If she looks back again within a minute (with a smile, preferably), she's likely interested, or at least open to you [source: Lowndes]. Try initiating a conversation.

Expert Patti Novak says to keep this conversation light and causal -- avoid intense subjects, like politics or religion. If you listen attentively, take heed of her interests, and use that to think of a good first-date idea. If she loves art, for instance, ask to take her to the latest exhibit at the museum.

Pick-up artist Neil Strauss also says to keep it casual. He's so adamant about it, in fact, that he doesn't think a guy needs to ask a girl out on a date at all -- at least in the traditional sense. It's too uncomfortable to sit across from a stranger for two hours over dinner as you evaluate each other, he maintains.

Instead, if you want to get to know a girl better, you should invite her to do a task with you that you need to do anyway. Strauss gives the example of shopping for shoes. "That way, the focus," he says, "isn't on you two -- it's on the task." You also could ask the girl to a dinner party or any group event with more than four people. Whatever it is, it should be quick and fun, according to Strauss.

Ever hear that you can conquer your fear by facing it head-on? Psychologist Albert Ellis experienced this when, at the age of 19, to get over his fear of talking to girls, he went to the Bronx Botanical Garden and attempted to speak to as many girls as possible. Thirty promptly left without giving him a chance. Out of the 100 that he did speak to, he could only score one date -- and she stood him up. But through this experience he got over his fear and later considered himself "one of the best picker-uppers in New York" [source: The Times].

How to Know If You're Ready to Move In Together
How can I tell when to text and when to call?
How to Build Marital Bliss