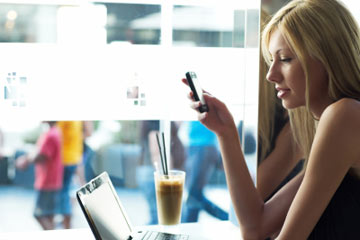 Sure sending a text is relatively painless, quick and comfortable, but will it land you a date?
©iStockphoto.com/Mario13

Asking a person out on a date was decidedly less complex before 1992. When looking for an immediate response, the person asking had pretty much two options: asking in person or over the phone. December 1992 marks the moment that everything changed, however. In the first week of that month, a 22-year-old Vodaphone software engineer named Neil Papworth sent the world's first text message. Despite their remarkable weight and size, cell phones at the time weren't yet equipped to send texts; Papworth sent the first text, "Merry Christmas," via keyboard to a colleague's phone [source: Shannon].

That first message changed everything. In just a few years, phones would be regularly equipped to send and receive short message service (SMS) and a person interested in asking someone out had a new conundrum: text or call? As with any new technology, the etiquette associated with texting remains a bit murky; there's no definitive way to guide an already nervous would-be date. Instead, the decision to text or call to ask another person out on a date is an individual one, and is based on context. Depending on who's being asked, the decision can speak volumes.

There are decided advantages to sending a text message. They're brief and uncluttered, yet are still able to get the point across. They can also be proofread before sending; a phone conversation can easily become unnecessarily protracted and uncomfortable, especially when the caller is nervous about the prospect of being turned down. The text message also has the added benefit of providing the person being asked the opportunity to quickly -- and remotely -- turn down the request.

While there are certainly exceptions, men seem to prefer texting. In addition to the reasons above, men find that texts assure that the other person will get the message, are an easy option for a busy schedule and save the conversation for the face-to-face date [source: Single City Guy].

There is a discrepancy between what men and women want when it comes to the question of whether to text or call. Calling, according to women who prefer the method, allows for a quicker response time. For example, in a situation where the person asked has said he or she's unavailable for a certain time, the phone call allows for a quick follow-up: When will he or she will be free for a date? A text featuring the same follow-up question, due to the lag time inherent between texts, may "verge on creepy" [source: Farris].

Although the text is decidedly more comfortable, it's this very quality that also serves as detraction in the minds of some people. Included in simply sending a text is another message -- that the sender is something of a coward. A phone call certainly does inherently contain much more risk of discomfort and awkwardness, but because of this, calling to ask for a date is a courageous act -- one that probably won't be lost on the person being asked [source: Gant].

A good rule of thumb, then, would be that if you care about landing the date, ask for it with a phone call. If you're blasé about whether the other person accepts or not, then text; just don't expect a yes.

Is Sapiosexuality a Real Thing?
When is the right time to say 'I love you'?
How to Propose to Your Boyfriend