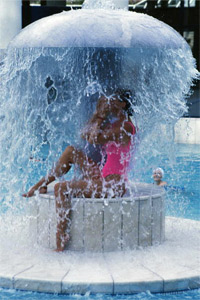 Using water to soothe and heal is an ancient practice. Archaeologists have found remains of bathing rooms in the palace of Knossos that date from 1700 B.C., indicating that the Greeks appreciated the effects of a good, long soak. The Greek physician Hippocrates (460-377 B.C.) also wrote extensively about the healing power of water. He advocated the use of saline baths and regularly immersed his patients in seawater to cure several ailments, including aching muscles and arthritis.

Ancient Egyptians embraced water-based therapies just as enthusiastically. Cleopatra (69-30 B.C.) visited the Dead Sea to soak in its mineral-rich waters and may have established pharmaceutical and cosmetic factories near its shores. But it was the Romans who took bathing to a new level of sophistication. At first, Roman baths were small, private and unobtrusive. Then came larger neighborhood baths, which were followed by massive public baths. The Baths of Caracalla represented the pinnacle of the Roman bathing experience. Constructed between A.D. 206 and A.D. 217, the Baths of Caracalla covered 27 acres and could accommodate 1,600 people at a time.

Eventually, the Roman Empire collapsed and, with it, interest in balneotherapy. The last Roman baths were abandoned by about A.D. 537. By the time the Black Death swept through Europe in the 1340s, public bathing had all but stopped. In addition to fears associated with disease transmission, the strict moral code of the Roman Catholic Church discouraged people from visiting public watering places.

Then, in the 1800s, came a renaissance. Vincent Priessnitz, an Austrian peasant, used cold-water therapy to heal wounds he obtained when a heavy cart rolled over him. Word of his recovery spread, and thousands of people came to him. He treated 1,600 patients in 1840 and, three years later, published "The Cold Water Cure," a book that spread his treatment philosophies to thousands more. Sebastian Kneipp, a German priest, picked up the baton and continued to advance balneotherapy. He improved some of Priessnitz's techniques and began to add herbs to the water.

Not Just for Humans

Other animals have discovered the healing benefits of water. In Japan, wildlife made use of the country's hot springs long before humans. For example, the Yunoyama Onsen, located in the Suzuka Kokutei Park near Gozaisho-Dake in Mie, is known as the "Deer Onsen" because eighth-century hunters discovered the thermal bath only after local deer jumped in to enjoy a long, hot soak. And today, Japanese macaques, which live in mountainous areas of Honshu, are often observed taking dips in the region's many volcanic hot springs.