Is milk good for acne? 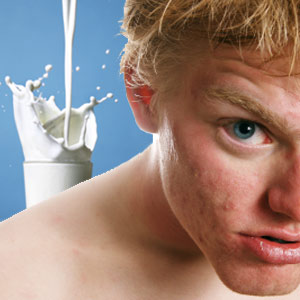 Milk and dairy products have been linked to breakouts.
©iStockphoto.com/Scott Leigh/Lise Gagne

Got milk? It does a body good -- at least that's what we've been told. But when it comes to acne, that may not be the case. Acne affects 98 percent of people between the ages of 16 and 18, but studies show that limiting the intake of milk and other dairy products may help keep breakouts under control -- especially in teenagers [source: Adebamowo].

Parents often encourage their children to drink milk -- after all, it's high in calcium, which promotes healthy bone development. However, milk is also high in hormones, and a 1996 study found a link between those hormones and teenage acne [source: Adebamowo]. Milk contains hormones because milk-producing cows are almost always pregnant. On top of that, many cows are injected with growth hormones on a regular basis so they can produce larger amounts of milk [source: The Independent]. Teens are already prone to acne because of changes in their hormones that happen during puberty -- these changes are one of the primary causes of acne [source: WebMD]. Adding hormone-saturated milk to the mix can make breakouts even more likely. Milk is also high in sugar and fat -- two ingredients that may aggravate acne [source: TIME].

There are many misleading myths that certain foods -- such as chocolate, peanuts and greasy food -- cause acne. But so far, milk and dairy products are the only foods that have been linked to breakouts. To read more about the connection between milk and acne, see the links on the next page.

How does lavender work in skin cleansers?
Do certain cleansers cause itchiness?
What would happen if you never washed your face?