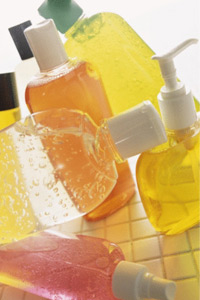 Body cleansers can be gentle or harsh, moisturizing or exfoliating, and they can smell like everything from bubble gum to ocean breezes. But are cleansers made for men and women really any different? See more personal hygiene pictures.
Kurtwilson/Botanica/Getty Images

Do you remember when soap was simple? A bar was all you needed to get your body clean and smelling fresh. Today, there are liquid cleansing options ranging from foaming gels and hydrating creams to antibacterial washes. And each has its own claim to moisturize, exfoliate or prevent breakouts.

All soaps contain the same basic ingredients: soap compounds, synthetic surfactants and alkali fatty acids. It's what makes them soap. So what's the problem with bar soap? Although a variety of bar soaps exist, people with dry or sensitive skin often find they can be harsh on skin.

But not all cleansers contain those basic soap ingredients, or at least not in the same ratios. Cleansers aren't exactly the same as soaps because they don't need to contain the same levels of detergent and fatty acids. They often contain ingredients that promise to moisturize, deodorize or prevent skin problems such as acne or aging skin. Because of this, liquid body cleansers are less likely to strip natural oils from our skin. But do the ingredients of body cleansers that are made for men versus those made for women make a difference, or are cleansers unisex? Let's get to the bottom of it.

Don't we all, despite our gender, basically want the same things from a body cleanser? It should remove dirt, dead skin cells and any unwelcome bacteria that may be hanging around. Despite these fundamentals, cleansers and other skin-care products designed especially for men are growing into a sizable market, valued roughly at $20 billion in 2009 [source: Packaged Facts].

Men's skin tends to be thicker than women's skin, and we're not speaking metaphorically. Men's skin has a fatter layer of collagen within the dermis, which is the middle layer in our skin's three layers. Men also tend to have oilier skin than women, which you can blame on hormones. The higher level of androgens circulating throughout men's bodies increases the amount of sebum the body produces.

While any cleanser will do the job, men's cleansers may contain stronger ingredients because men's skin can stand up to them. Sodium lauryl sulfate, for example, is a common ingredient in soap. There's no question it'll get you clean, but some people find it to be drying -- it's known to strip away the natural oils from our skin's moisture barrier. Additionally, cleansers that contain salicylic acid or benzoyl peroxide can help prevent breakouts on oily skin, but you want to be careful not to remove all the natural skin oils. Even when skin is oily, it's important to keep it hydrated -- so treat oily skin with ingredients that remove oils and treat acne, but balance those treatments with oil-free moisturizing ingredients or risk a full-body dry-out.

Men should also consider the benefits of exfoliation. Body cleansers that double as scrubs contain different types of exfoliating particles, some harsher than others. Men's thick skin can often tolerate a more abrasive exfoliation, such as from ground fruit pits or other rough-edged ingredients. Alternately, men can try a cleanser that contains hydroxy acids to get exfoliation along with anti-aging benefits.

And, speaking of aging, as we age, our skin's needs change. Men over 50, your cleanser may need an update. As men age, the hormones that once caused oily skin are on the decline, and you'll do best to look for products that help retain moisture and prevent skin from getting too dry.

Not Everything's Coming Up Roses

One of the biggest differences between products designed for men versus those intended for women is what the products smell like. Women's skin-care products, including cleansers, are more often floral or sweet smelling, while men's cleanser fragrances could be considered sporty or spicy. Despite the bouquet, dermatologists recommend we all go fragrance free to avoid potential irritation and allergies.

Women's skin, while it's comprised of the same things as men's skin, has different concerns. Women's skin is not as thick as men's skin, due a naturally thinner layer of collagen in the dermis -- in fact, the collagen layer is about 25 percent smaller [source: P&G Beauty & Grooming]. Additionally, hormones play an important role in determining a woman's skin type, just as they do with men. This doesn't mean that women can't have oily skin or men can't have dry skin, but it suggests that our gender contributes to how the cards fall. And, just like men, women's skin becomes thinner and drier as they age -- for women, that happens right around the time menopause hits and estrogen levels drop.

You'll find many women's body cleansers contain pretty much the same ingredients as those marketed to men. Hydrating ingredients, including glycerin, which helps to attract moisture to the skin, as well as petroleum-based ingredients and oils that help seal moisture into skin are common, as are acne-busters such as salicylic acid and benzoyl peroxide.

While ground apricot pits may sound like they'd scrub all those dead skin cells off -- and they will -- they can be too harsh for women's skin because of their rough edges. Exfoliating cleansers that contain smooth, round particles -- such as polyethylene beads or sodium tetraborate decahydrate (borax) granules -- are a gentler yet still effective option. Our skin generally regenerates itself on a monthly basis, but regular exfoliation will help remove dead skin cells before they can cause flaky and uneven-looking skin. Exfoliation will also help the post-shower moisturizer soak into skin more effectively.

Ultimately, the skin-care products you choose should be the ones that work best for your skin type, age and lifestyle, and that has little to do with gender. Some men may prefer an all-in-one cleanser that not only washes away dirt but also fights acne and replaces the need for a separate moisturizer -- whether it's in male-specific packaging or comes in a small, pretty container. If its ingredients give you the best results, it doesn't matter if it's for men or for women. It's for you.

Sensitive skin doesn't care if you're male or female. But it does care about irritants. Mild cleansers that contain synthetic surfactants (detergents) and have lower pH levels are best for sensitive skin -- neutral is best. Additionally, cleansers that don't contain fats are also a good choice for sensitive skin. These cleansers often contain moisturizing ingredients that help boost the skin's natural moisture layer, including glycerin, cetyl alcohol and stearyl alcohol.

Laser Razors: They're Sort of Like Lightsabers for Grooming
How should men deal with dry skin?
How often should men exfoliate their faces?