How to Smooth Out Rough Skin on Your Face 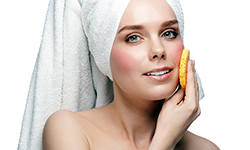 Rough, scaly, sandpaper-like skin is bad enough on the elbows, knees, hands and feet. When it shows up on your face, though, you may feel like going into hiding. Not only does the redness make you look perpetually embarrassed, but the pain, itchiness and flaking are also enough to drive you mad.

In many cases, a rough complexion is the result of dryness, also known by the fancier term "xerosis." Low humidity levels, sun exposure, harsh soaps, acne treatments and other abrasive factors degrade the skin's natural moisture barrier, leading to peeling, irritation and cracks.

Rough skin can also be the symptom of numerous chronic and acute skin conditions. Some of the most widespread problems include:

Whether dryness or another condition is responsible, there are steps you can take to prevent, soothe and smooth rough skin on your face. Keep reading to find out more.

Preventing Rough Skin on Your Face

Since environmental factors contribute to dryness and other roughness-causing conditions, you can make lifestyle choices that prevent scaly skin. Here are a few to try:

Treating Rough Skin on Your Face

Even if you take preventive measures, you may still wind up with a case of rough, irritated, flaky skin. Luckily, there are effective ways to treat it:

For more information about rough skin and dryness, check out the links on the next page.

Can you moisturize too much?
How can I keep my nose moist when I have a cold?
Moisturizing Socks