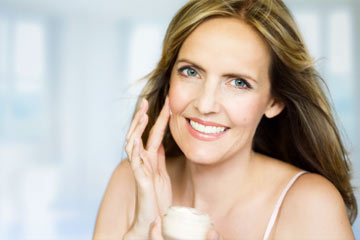 Splotches and blotches may make for a great tie-dyed T-shirt, but a mismatched or patchy color palette usually isn't the best look for your skin. If parts of your skin have changed color -- and not because you got a tattoo -- you may have hyperpigmentation. Fortunately, skin-lightening moisturizers, sometimes known as skin bleaches, can sometimes reverse this condition.

Hyperpigmentation is related to the melanin, or the pigment produced by melanocyte cells, in your skin. When your body produces too much melanin in one area, hyperpigmentation -- or darker spots on your skin -- is the result [source: U.S. National Library of Medicine].

Overproduction of melanin can happen for a variety of reasons. Take sun spots, for example. When the skin is exposed to potentially harmful ultraviolent light such as the sun's rays, the body may produce extra melanin for protection. When those concentrated areas of melanin are greater than normal, or clumped together, the result is called sun spots or liver spots. Though sun spots aren't dangerous, they can be unattractive [source: Mayo Clinic]. Other forms of hyperpigmentation, like melasma, are the result of hormones that trigger excess pigment production [source: WebMD]. For example, women may experience melasma during pregnancy.

Skin-lightening moisturizers are helpful in treating skin pigment problems because they are formulated to penetrate deep into your skin and gradually reduce the appearance of the concentrated pigment, sometimes helping it to fade altogether [source: Mayo Clinic]. However, skin-lightening products can have side effects. Check with your physician before you begin using these products, which are available in both over-the-counter and prescription formulas. Using skin-lightening products incorrectly or for too long could put you at risk for serious complications.

The main ingredient in most skin-lightening moisturizers, hydroquinone, packs a whallop when it comes to completely eliminating dark skin spots. If you're label savvy, look for hydroquinone under its actual name or as a derivative like Benzene-1 or Tequinol [source: Oakley].

Other active ingredients in skin-lightening moisturizers could include deoxyarbutin, glycolic acid, kojic acid, corticosteroids, niacinamide and retinol [source: Mayo Clinic]. Retinol, produced from vitamin A, and its stronger sister tretinoin, can moisturize the skin while stopping melanin production. Natural ingredients include plant-based botanicals like soy, licorice extracts and arbutin, which is produced from blueberry, pear or cranberry plant leaves [source: WebMD].

While these ingredients do not lighten the skin on their own, they can prevent new melanin from developing. This gives your skin the chance to go through its natural process of eliminating dying skin cells to make way for new ones, which eventually results in the dark patches being replaced by lighter skin [source: Janes].

It's clear that skin-lightening moisturizers contain some serious chemical ingredients and should be used carefully. On the next page, find out how to use a lightening formula to brighten dark areas on your skin without harming the normal pigmentation.

If you are concerned about skin-lightening moisturizers, your physician may recommend laser therapy as an alternative treatment. Lasers, particularly intense pulsed lights, can effectively remove sun spots and other forms of hyperpigmentation [source: Mayo Clinic]. Directed, pulsed light can be aimed directly at dark areas of the skin, causing dark skin cells to slough off quickly. After an exfoliation, the body is ready to produce new skin of a more normal pigmentation. Like lightening creams, however, lasers have some downsides. They can be very expensive, costing you up to $300 per session. There's also a chance that lasers my increase the number of free radicals in your skin, causing problems similar to those triggered by UV ray exposure [source: Bouchez].

Patience is indeed a virtue when it comes to getting rid of dark spots on your skin naturally, as it can take months or even years for them to fade by themselves. Topical skin-lightening moisturizers can speed up the natural process, but only if you use them correctly.

You'll find directions for use on the labels of skin-lightening products, but proper use will vary based on the ingredients in the product and your skin type. To avoid complications and speed up the lightening process, talk to your doctor. A physician can examine your hyperpigmentation, recommend products and monitor their use.

Some products are safe to use for only around three weeks at a time, while other products may be safe for up to six months [source: Oakley]. Don't always trust the back of the box; ask your physician how long you should use your lightening cream and how often. Then allow your physician to monitor your treatment in case the formula causes additional skin problems.

Less is more when it comes to using a skin-lightening moisturizer. It's best to dab it onto each small dark spot instead of slathering it on an entire body part. If you cover an uneven area that includes both dark spots and normal pigmentation, you run the risk of lightening areas that were not discolored to begin with [source: Janes].

Even if you follow a physician's recommendations for using skin-lightening products, there's no guarantee you won't run into complications. Keep reading to learn about the health risks that come with eliminating skin spots.

Acne can affect any color of skin. It's bad enough as is, but when acne inflames the skin and leaves behind ugly scars, it can become a lasting annoyance. Acne scars that change the color of affected skin cells are called post-inflammatory hyperpigmentation and are most noticeable in dark skin [source: American Academy of Dermatology]. If you have acne scars, consider using makeup to cover small areas temporarily. For a more permanent solution, you can try a skin-lightening moisturizer or laser treatment.

Using skin-lightening moisturizers to erase hyperpigmentation can come with its fair share of health risks. These risks are due mainly to the potent ingredients in skin-lightening products.

Hydroquinone, the main ingredient in most skin-lightening moisturizers, may lead to cancer as well as ochronosis, which further darkens the skin and causes joint problems [source: Merola]. In many Asian and European countries, hydroquinone has been banned from over-the-counter products. In the United States, however, manufacturers are allowed to use the ingredient, as long as it makes up only 2 percent or less of a formula.

Physicians may prescribe a skin-lightening moisturizer with up to 4 percent hydroquinone. But this may not be a healthy prescription. In 2006, the FDA proposed a ban of skin-lightening products that contain hydroquinone. They are currently reviewing research, data and public comments on the proposal [source: Bouchez]. While some physicians agree that hydroquinone is dangerous, others argue that the ingredient is highly effective and acceptable to use [source: Janes].

In rare cases, mercury salts are also incorporated into the skin-lightening formulas, but use of products containing mercury is not often recommended. Though it can stop melanin production, mercury is also a toxic substance [source: Oakley]. Once a common ingredient in a number of products, mercury has been removed from most cosmetics over the years and is still strictly regulated. Exposure to mercury can lead to neurological complications and kidney damage [source: MedicineNet].

If you intend to use a skin-lightening product, check the ingredient list. A skin lightener with mercury or a high concentration of hydroquinone could be unsafe. A good replacement formula might contain kojic acid or a combination of retinol and botanicals [source: Janes]. If you have concerns about a particular formula or your skin condition, contact your physician for advice.

Skin-lightening moisturizers are just one of several treatments available for hyperpigmentation. To learn more about how to solve skin pigmentation problems, take a look at the links on the next page.

Take a close look at the dark spots on your skin. Your hyperpigmentation could actually be something far more dangerous. If your skin pigment has changed quickly, if a dark spot has changed in size or if it has irregular borders and strange colors, it could be melanoma, a form of skin cancer. See your doctor if you suspect melanoma. Your pigment change may be hiding a much darker secret [source: Mayo Clinic].

Can you use oil-based moisturizer on oily skin?
5 Important Ingredients in Face Moisturizers for Women
Quick Tips: Using Sesame Oil on Your Skin