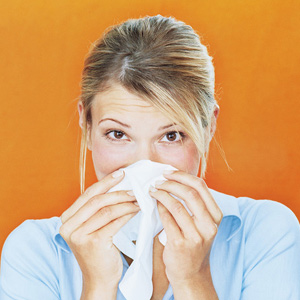 A chapped nose can be one of the worst parts of having a cold. See pictures of ways to get beautiful skin.
Pando Hall/Digital Vision/Getty Images

Unless you have a real affinity for watching daytime television on NyQuil, there's nothing fun about having a cold. People eye you warily with each sniffle, convinced you'll spread your dreaded disease to anyone within a 2-inch radius. You're charged with drinking fluids, a deed that may make it impossible to rest if you have a small bladder. But if your bladder doesn't keep you awake, the constant coughing and sneezing probably will. And even the most beautiful starlets can't pull off cold and flu glamour -- nothing makes bloodshot eyes, a deathlike complexion or a red, cracked nose look attractive.

That red nose may be the biggest insult to a cold sufferer, as the only acceptable occasions for red noses are those in which clowns or Santa's head reindeer, Rudolph, are present. It's more than aesthetics, of course; that dry, cracked skin makes blowing a mucus-filled nose excruciatingly painful. Is there a way to keep that nasal skin moist so that using a tissue doesn't feel like scraping nails across one's skin?

Before we get into how to keep a nose moisturized during cold and flu season, let's review a little bit about how that area gets so inflamed. Winter is hard on your nose's small blood vessels. If you go outside into frigid temperatures, the blood vessels clamp down, which minimizes blood flow to the region and causes irritation [source: Lerche Davis]. Then, once you head inside, your blood vessels open back up. That doesn't cure the irritation, it simply makes the area more sensitive to pain. Further complicating matters, there's little moisture in the air during the winter, so already the nasal area is at a disadvantage when it comes to accumulating much-needed moisture. The dry air breaks down what little protection that sensitive skin has.

That's the situation for every nose in winter temperatures, but when you add in a runny nose during cold and flu season, it only gets worse. A runny nose further aggravates those blood vessels, already so sensitive to temperature changes and dry air. With each wipe of a tissue, you exacerbate the pain. So what's to be done?