Why does nail polish turn your nails yellow? 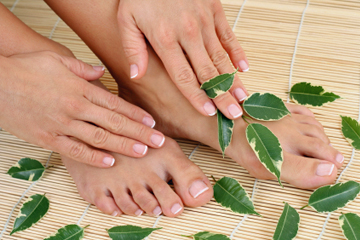 Your fingernails and toenails can say a lot about your health and hygiene. See more pictures of personal hygiene practices.
© iStockphoto.com/matka_Wariatka

Your fingernails and toenails keep you safe while you're walking and picking up objects, and they're great for scratching an annoying itch. Because your nails say so much about you and your health, it's natural to for others to respond positively when you have particularly attractive nails, or to cringe if you have unattractive, unhealthy nails. Whether for vanity or just for good hygiene, Americans spend billions each year on nail care products and services [source: Carlson, Eisenstat and Ziporyn].

Your nails are planes of hard, tightly packed epidermis cells, the same cells that make up your skin. These particular cells are considered dead, and they're filled with a protein called keratin. Only three-fourths of your nail bed, the part where your skin's still attached, is exposed above your skin. It takes about six months for a nail to grow in completely, and men's nails grow faster than women's nails.

Like skin, nails need exposure to oxygen to stay healthy. The keratin in nails also allows them to let water pass through them. Irregular ridges, peeling, breaking and discoloration could be signs of possible health issues. Yellow nails can indicate psoriasis or a fungal infection, or can be caused by pulmonary disease or smoking. In many cases, though, yellow nails are just a result of staining due to contact with certain foods or chemicals, such as those in nail polish. 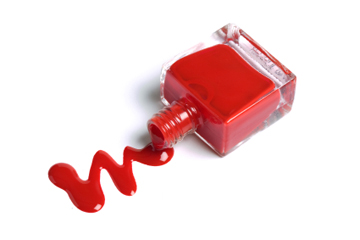 Nail polish ingredients include a film-forming substance, a solvent and pigments.
© iStockphoto.com/pederk

Nail polish, also called nail enamel or nail lacquer, has evolved throughout the centuries thanks to scientific research. Most nail polishes on the market today are non-toxic, yet contain chemicals to help with application, drying, glossiness and long-lasting adhesion to the nail.

In recent years, manufacturers have started to introduce water-based nail polishes. The polish still needs a filming agent, a solvent and a pigment, but the manufacturers aim to avoid petrochemical solvents. The target market for the new formula is consumers who are sensitive to the ingredients in other polishes, or those looking for environmentally friendly cosmetics.

In the United States, any colors added to nail polish must be certified by the Food and Drug Administration. Your polish color is some combination of pigments from organic dyes and other sources, such as iron and chromium oxides (for creating red and yellow) and ultramarine (for creating blue). Creamy polishes use titanium dioxide to add opacity, and pearlized polishes include either natural pearl (guanine crystals), or the cheaper alternative bismuth oxychloride. 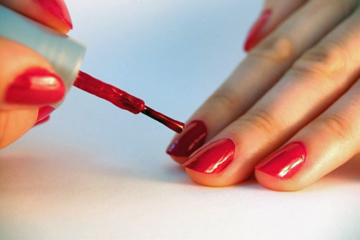 Iron oxides and other pigments in red nail polish can potentially stain the nails underneath.
© iStockphoto.com/SilentWolf

As mentioned earlier, yellow nails could be caused by several things, including some medical conditions. When it comes to nail polish, though, the yellowing is a result of your nails absorbing some of the pigment from the polish. Shades of red, from light pink to dark burgundy, make up the widest variety of nail polish colors in the United States, and the darkest reds are most likely to stain your nails yellow.

Let's look closer at one family of these pigments, iron oxides. This includes some of the same chemicals we refer to as "rust" when they occur naturally on cars and old metal pipes. Paint manufacturers, including some nail polish makers, often use iron oxides as red and yellow pigments.

If you've spent much time in an older home, you know that water running from old iron pipes can be brown from rust, and a porous porcelain sink connected to those pipes takes on brownish red stains from the iron oxides in the water. Iron oxides in nail polish are suspended in a much different solution. Because the keratin in your nails can absorb liquid, the nails can also absorb the iron oxides from your polish just like that porcelain sink absorbed them from the water. As a result, your nails may have a yellowish or brownish stain for a while even after you remove the coats of polish.

Can a base coat help? The primary reason to apply a clear base coat to your nail first is to form an even surface for applying the color polish. Some base coats are substantial enough they serve as the complete first layer of polish. In some cases, these could cut back or eliminate the yellowing that could result from contact between the nail and the pigment.

Can nail polish remover be a problem? The remover itself can be volatile and could damage the skin with too much exposure, but it's not likely to cause yellowing of the nail on its own. As a strong solvent for the polish, though, it could increase the exposure of your nail to the pigment in the polish. Reduce this exposure by frequently changing to a new cotton ball or other applicator while you're removing the polish.

For more information about nail polish and nail care, put on your coat and head over to the next page.

Contrary to today's folklore, nails don't continue to grow after death. The appearance of growth in the nails is actually just the shrinkage of the previously living skin from the nail plate.