Are the chemicals used at nail salons bad for you? 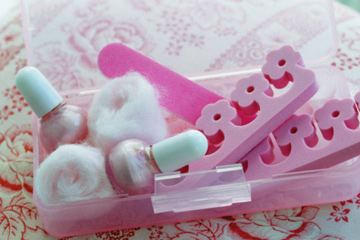 How safe is your nail salon?
Valueline/Thinkstock

Hitting the nail salon for a mani-pedi is one of life's simple pleasures. But when you consider the chemicals that go into making your nails look their best, you may start to think twice. In 2011, researchers at the Cancer Prevention Institute of California concluded that nail salon workers were exposed to unsafe levels of toluene, a solvent found in nail polish and fingernail glue. Prolonged exposure to toluene can lead to reproductive and neurological damage, putting salon workers at risk. In the same study, the air inside three salons that were studied was also found to contain unsafe levels of methyl methacrylate, a substance that has been banned by the U. S. Food and Drug Administration since 1974. In questionnaires, salon workers reported experiencing coughing, shortness of breath and irritation to the eyes, nose and throat.

Toluene is only one of at least a dozen chemicals you're exposed to at a nail salon. Fingernails, just like skin, are porous, and whatever you put on them is going to work its way into the bloodstream. You're probably most at risk if you have acrylic nails applied, but any kind of chemical brushed onto your nails, including polish and remover, will find its way into your system. Most of the health concerns are concentrated on nail salon workers because of their prolonged exposure, but if you're trying to minimize your exposure to dangerous chemicals, then you may want to look for a nail salon that uses all-natural products and polishes.

Pedi-Cures: Protecting the Skin You Walk In
Summer 2012 Nail Art Trends
How often should I file my nails?