The Colorful History of Nail Polish

by Kristen Hall-Geisler Dec 21, 2018
Even though manicures have gotten more and more expressive, nothing is classier than a great coat of red polish. Ian Gavan/Getty Images for IMG

When you're out getting your weekly mani-pedi, have you ever stopped to wonder "where in the world did nail polish come from?" Well the history is long and colorful and probably not exactly what you'd imagine.

The very first people to apply color to their nails were likely in India during the Bronze Age, and they probably used henna to do it. The use of henna as a dye for body art was very common, so extending the designs and color onto the nails was a natural next step.

From India, the trend spread to China, where the Chinese took the nail game up a level sometime around 3000 BCE. They created a sort of nail varnish using a mixture of egg whites, beeswax, gelatin, gum Arabic (sap from the acacia tree) and alum, then colored that with flower petals, or gold or silver dust. They further personalized the looks with artificial nails made of silver and gold covered with jewels or cloisonné, as well. These elaborately designed and colored nails were exclusively reserved for royal classes only.

Around the same time, the Babylonians were getting into the nail game, but it was the warriors who were wearing color. The men pigmented their nails with kohl (finely powdered sulfide) before going into battle. Again, even among these soldiers, class mattered. Higher-class warriors had their nails colored with black kohl, while lower-class fighters used green kohl.

Eventually, the nail trend spread west across Asia and into Africa. Henna has been found painted on mummies, including their nails, but flashy red shades were also used. Nail color signified class in Egypt, too. The redder one's nails in ancient Egypt, the more power the person had. Queen Nefertiti, step-mother of King Tutankhamun, wore dark red nails, a color rumored to have blood in it. Cleopatra is said to have painted her nails from the juice of the henna plant, which created a deep, rusty color. Women of lower rank were allowed to wear pastel colors only.

Manicures these days can be used to express your personality — and your love of the game.
Alexander Hassenstein/Getty Images

Colored nails continued in popularity, especially by the Renaissance Era, when trade with countries in Asia opened up. Coloring and bejeweling nails hit another high in 18-century French courts, where outlandish fashion trends were the rage. By the Victorian Era, women were creating color with tinted creams and clear varnishes.

Women also were using tinted cream polishes on their nails to give them a shine. They'd apply the mild abrasive and buff it to a shiny look. But it took time to apply the powder cream polish and buff each nail to a shine. In 1916, Cutex changed that when it introduced its first clear nail lacquer. Painting a layer of shine on fingernails became much easier than buffing.

It wasn't until the early 20th century that polish as we know it came into existence. And we have the automobile industry to thank. In the 1920s, automotive paint was invented, and not long after, French manicurist Michelle Manard adapted the formula to create opaque nail polish. Her employer, Charles Revson, knew a good thing when he saw it, so he and his brother Joseph launched a new company, Revlon, with the first colored nail enamel in 1932.

Manicures were far from being the exclusive territory of the upper classes at this point. A bottle of Cutex nail polish cost 35 cents in 1934, an affordable luxury in a time of tight purse strings. When America entered World War II and women joined the workforce in huge numbers, manicures changed accordingly. Long nails were not going to last while doing shift work at the factory; even The New York Times ran remedies for "motor mechanic hands." Rather than trying to keep up brightly painted nails, women working manual jobs turned back to clear polish or even buffing with cream polish.

After Manard invented colored nail lacquer, women were having their nails coated from base to tip with solid colors. But it didn't take long before the French manicure became a mark of manicured sophistication. Rather than using two colors, as we often do today, women would leave the moon at the base of the nail and the tip completely — and very carefully — unpainted.

Black nail varnish was introduced in the 1930s, though there's no evidence of any soldiers getting their nails done a la the Babylonians. At the same time in England, women were having landscapes painted onto their nails, a level of detail not attempted since the Chinese cloisonné nails of nearly 5,000 years before.

NOW THAT'S CRAZY
You can now find nail polish nearly everywhere, in nearly every color, and for as little as a few dollars a bottle. But the echoes of the Chinese, Babylonian, Egyptian and even French still linger, especially in Azature's Black Diamond polish. It contains 267 carats of black diamonds and costs $250,000 a bottle.

The 'Green Book' Was a Lifeline for Black Travelers 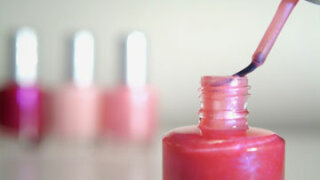 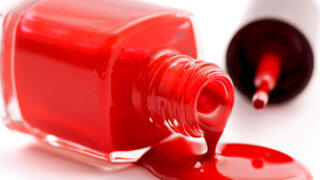 How to Avoid Bubbles in Your Nail Polish Finish 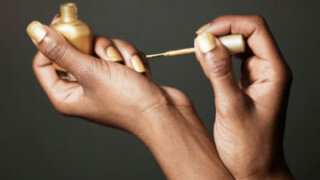 How many coats of nail polish are necessary?