Why does nail polish remover have that smell? 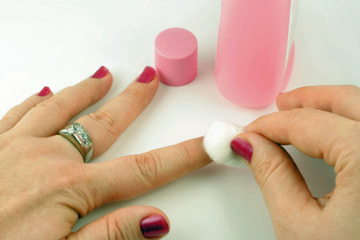 Unless you redo your nails several times a day, the smell won't hurt you.
Hemera/Thinkstock

When you pop off the top of a bottle of nail polish remover, that smell hits your cilia like a ton of bricks. What exactly is that, you wonder? It's most likely acetone, a solvent that's used to break down the ingredients in paint so you can thin it or remove it from a surface. Nail polish has ingredients that help ensure it stays on for a while, so it makes sense that it would need something strong to remove it. But how safe is it to use acetone on our nails?

Though acetone does have mild toxicity and can irritate eyes and skin, it's generally deemed safe for use, as long as it's used in a well-ventilated room and isn't ingested. Most testing for acetone has been done on animals, and kidney, liver and nerve damage occurred from long-term exposure, but this doesn't apply to most humans who come in contact with acetone, because we're not exposed to it for very long. That being said, it's gotten a bad rap from natural product advocates and some companies have made efforts to create effective nail polish removers out of less toxic ingredients.

Acetone is naturally occurring in our bodies and people with diabetes produce it in larger amounts, so occasionally, they may give off a smell that is similar to nail polish remover.

The Story Behind 14-Karat Nails
How is cuticle cream different from hand cream?
5 Home Remedies to Prevent Nail Problems