Although there is no singular formula for nail polish, most polishes contain the same basic components: film forming agents, resins and plasticizers, solvents, and coloring agents. Most nail polish companies use chemists and chemical engineers to research and test the best combinations of these materials. Over time, as new products become available, older ingredients are discarded. For example, formaldehyde was formerly be used in nail polish production, but is rarely used anymore.

The main ingredient in nail polish is nitrocellulose (cellulose nitrate). Nitrocellulose, a highly combustible material that is also used in making dynamite, creates a film that holds together other substances. It is made of liquid mixed with tiny cotton fibers. During the manufacturing process, the fibers are ground so small that they don't have to be removed from the product. It's also the main ingredient in cine film, or movie film. In fact, many early 20th century nail polishes used scrapped cine film as the raw material for nail polishes. While auto paint and furniture varnish are made from industrial nitrocellulose, nail polish is created from nail grade nitrocellulose.

Nitrocellulose is key in creating a good nail polish. A hard film must form on the surface of the nail, but it can't form so quickly that it disables the material underneath it from drying. By itself, however, nitrocellulose is brittle and sticks to nails poorly, so other ingredients are needed to achieve a good coating. Nitrocellulose comes in different viscosities that can match the viscosity wanted in the final product.

On the next page, we'll take a look at the other important components of nail polish.

Although colors such as pink and red are some of the most popular nail polish hues, less traditional colors such as dark blues and blacks have been embraced by different fashion movements. For example, in 1967, the London boutique Biba introduced black varnish to its hip clientele. In the 1970s, gender-bending rockers such as David Bowie and Freddie Mercury sported black polish. Although more universally available now, black nail polish continues to make a statement [source: NY Magazine]. 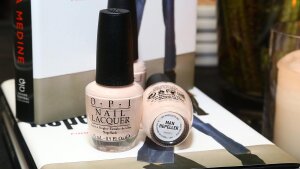 A Nail Polish With a Boring Name Just Isn't the Same 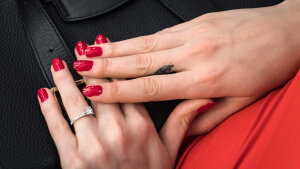 The Colorful History of Nail Polish