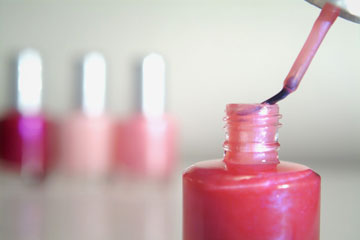 People have been painting their nails since 3000 B.C.
Medioimages/Photodisc/Getty Images

A manicure and pedicure can be the perfect ways to de-stress after a hectic week at work. The perfect shade of nail polish can do just the trick to pull together an ensemble or make a daring fashion statement. But have you ever thought about the complex history, manufacturing process and chemical content that go into that perfect shade of red nail polish?

Decorative nail coverings have existed since 3000 B.C. The ancient Chinese created a nail covering concoction of beeswax, gelatin, gum arabic and egg whites, and, for color and aroma, added flower petals from roses and orchids to the mix. In ancient Egypt, members of the upper classes used henna to dye their hair and fingernails because decorative paint was a sign of prosperity. During the Chou Dynasty in 600 B.C., gold and silver polish was worn by royalty. In the 19th century, women treated their nails with red scented oils and polished them with chamois cloth. Additionally, women began to apply varnish with camel hair brushes to their nails.

Although nail coverings have existed to thousands of years, nail polish (also called lacquer or varnish) as we think of it today is a thoroughly modern invention. Nail polish began to take on its current form in the 1920s, when Michelle Menard, inspired by the paint used to cover automobiles, created what we now call nail polish. Soon Hollywood starlets and fashionistas popularized the concept of nail polish, and it continues to play an important role in fashion and cosmetics to this day. While nail polish has always served a cosmetic purpose, it now also can promote nail health and protection.

The idea for nail polish came from car paint, but does our nail polish have anything in common with its earlier versions? Read on to find out about the ingredients in nail polish.

Although there is no singular formula for nail polish, most polishes contain the same basic components: film forming agents, resins and plasticizers, solvents, and coloring agents. Most nail polish companies use chemists and chemical engineers to research and test the best combinations of these materials. Over time, as new products become available, older ingredients are discarded. For example, formaldehyde was formerly be used in nail polish production, but is rarely used anymore.

The main ingredient in nail polish is nitrocellulose (cellulose nitrate). Nitrocellulose, a highly combustible material that is also used in making dynamite, creates a film that holds together other substances. It is made of liquid mixed with tiny cotton fibers. During the manufacturing process, the fibers are ground so small that they don't have to be removed from the product. It's also the main ingredient in cine film, or movie film. In fact, many early 20th century nail polishes used scrapped cine film as the raw material for nail polishes. While auto paint and furniture varnish are made from industrial nitrocellulose, nail polish is created from nail grade nitrocellulose.

Nitrocellulose is key in creating a good nail polish. A hard film must form on the surface of the nail, but it can't form so quickly that it disables the material underneath it from drying. By itself, however, nitrocellulose is brittle and sticks to nails poorly, so other ingredients are needed to achieve a good coating. Nitrocellulose comes in different viscosities that can match the viscosity wanted in the final product.

On the next page, we'll take a look at the other important components of nail polish.

Although colors such as pink and red are some of the most popular nail polish hues, less traditional colors such as dark blues and blacks have been embraced by different fashion movements. For example, in 1967, the London boutique Biba introduced black varnish to its hip clientele. In the 1970s, gender-bending rockers such as David Bowie and Freddie Mercury sported black polish. Although more universally available now, black nail polish continues to make a statement [source: NY Magazine].

After nitrocellulose and resins and plasticizers are combined, the next ingredient to add to the mix are coloring pigments held together by solvents. While early nail polish contained soluble dyes, today's products are colored with pigments. The solvent must evaporate after the polish is applied to nails. Coloring is added in a two-roll differential speed mill in order to grind the pigment as well make sure that all ingredients are evenly distributed throughout the polish.

While a fresh coat of nail polish can top off the perfect outfit, it can also contribute to overall nail health. On the next page, we'll take a look at nail polish and nail health.

Before you indulge in a relaxing mani-pedi, it's a good idea to think about the chemicals in nail polish and their effect on your overall nail health. Fortunately for us, modern technological advances have made nail polish much healthier than its car paint inspired predecessors.

For example, formaldehyde and toluene were once a popular ingredients in nail polish, and although they are still used in some nail products, greener and more natural nail polishes have replaced these chemicals with more health-friendly products. Products containing formaldehyde and toluene also can cause allergic reactions, manifesting in the form of swollen eyelids, in many people. Revlon, Sally Hansen, Rescue Beauty Lounge and OPI products have all phased out these potentially harmful products from their polishes.

If you use a good nail polish product free of harmful chemicals, your nails will likely be stronger and healthier with a little maintenance. To optimize nail health, moisturize your nails before polishing to prevent them from drying out. Also, keep in mind that you shouldn't use nail polisher remover more than twice a month. Instead, touch up chipped nails with polish. When you do use nail polish remover, avoid products that contain acetone, a product that's known to dry out nails.

The nail polish manufacturer OPI, which sells more than 40 million bottles of polish a year, is well known for coming up with clever names for its many hues. More than 57 of its shades are pink, one of the most popular being a cotton candy color called "Princesses Rule!". Sixty-nine polishes are shades of red, and "I'm Not Really a Waitress" is the perennial favorite among the reddish shades. More than 40 OPI colors such as "Chocolate Shakespeare," "I'm Fondue of You," "Coney Island Candy" and "Black Cherry Chutney" are named after food. "Black Onyx" is the most requested shade among men.