What would happen if I never cut my fingernails? 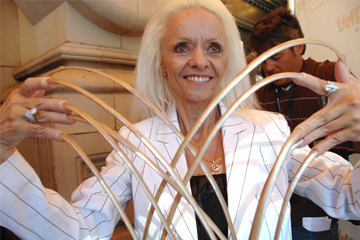 When Lee Redmond was ejected from the seat of an SUV during an accident in 2009, the Salt Lake City, Utah, resident wasn't left with life-threatening injuries -- but she was devastated just the same. Redmond, who'd become known as the woman with the world's longest fingernails, broke all 10 in the crash.

Redmond hadn't cut her fingernails since 1979 and spent hours each day cleaning and grooming them. In 2008, all her hard work paid off: she was listed in the book of Guinness World Records for fingernails measuring a total of 28 feet, 4 inches in length (8.65 meters). When an accident broke her fingernails to the nub just one year later, Redmond's record-breaking nails became a thing of the past. She wouldn't, she insisted, try to grow them out again [source: Thomas].

What would happen if you never cut your fingernails? Like Redmond's, could they grow to extraordinary (and impractical) lengths?

Your nails originate in the nail matrix, which lies under the cuticle. The nail matrix births skin cells and then transforms these cells into a tough keratin protein that makes a continual journey forward, pushed into motion by new cells forming at the nail matrix.

Several factors affect the rapidity of nail growth. Fingernails, for example, grow faster during daytime than at night. In addition, fingernails grow at a greater clip in the summer, for the young, and slower for older people and in the winter. The middle, ring and index fingernails grow the fastest, while the thumb and little finger lag behind. Pregnancy gives nail growth a boost. So does minor trauma to the nail, such as nail biting. Researchers point to a variety of potential causes for the differences in growth rates, attributing the variances to everything from thickening blood vessel walls to ultraviolet radiation [source: Baran et al.].

Not be outdone, Christine "The Dutchess" Walton of Las Vegas, Nevada, is the reigning Guinness World Record holder. By 2013, her fingernails had grown to a combined 23 feet, 11 inches (7.31 meters), just shy of Redmond's top length. Walton's fingernails have grown into a curving maze, but if they were straightened and laid end-to-end, they'd be the same length as a killer whale. Every day, she painstakingly soaks them in olive oil and cleans them with a toothbrush. Occasionally, she applies an acrylic veneer to strengthen them [sources: Guinness World Records, Ward].

Walton's daily nail care routine signals a commitment few other people have made -- at least not to such great lengths -- but also highlights what's possible. Left untrimmed, your nails could continue to grow to several feet in length.

Top 10 Things Your Nails Say About Your Health
How Long Can Human Fingernails Grow?
How to Match Colors to Your Skin Tone