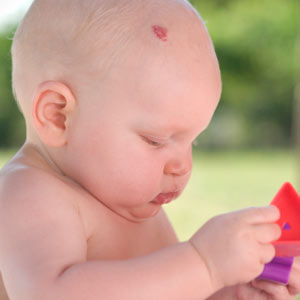 If you notice a spot growing on your newborn son or daughter, your first reaction is probably alarm. But if the lesion is small and red, there's probably no need to worry. You should definitely have it looked at by a doctor, but chances are it's just a hemangioma. Despite their ominous name, hemangiomas are just vascular birthmarks made from growths of extra blood vessels. They also happen to be pretty common; about one in every 50 babies develops a hemangioma [source: Greene].

Unlike other birthmarks, hemangiomas aren't usually permanent. They typically appear soon after the baby is born and grow larger before beginning a very slow process of shrinking [source: Mayo Clinic]. Most of them disappear on their own, but sometimes it can take as much as 10 years for this to happen. For the most part, hemangiomas are harmless and painless, but it's important to keep an eye on them because they can cause problems if they develop near an eye or an ear. There are also rare cases in which hemangiomas can become life-threatening, so if your infant develops one, you'll want to have a doctor look at it so it can be treated [source: Cincinnati Children's].

Keep reading to find out the cause behind these common birthmarks.

Are Hemangiomas Painful for Babies?

Hemangiomas might look unsightly, but the large majority of them are completely harmless. Usually, you can touch them without making a baby cry, which should be a pretty good sign. Even though the growth itself might not be painful, some hemangiomas can cause complications, depending on where they develop. In extremely rare cases, they might even be life-threatening.

More than 80 percent of hemangiomas develop on the head and neck; the rest can pop up anywhere, including internally [source: Hochman]. If they grow in the wrong area, they can affect everything from your baby's sight to his breathing. For example, a hemangioma that develops on the eyelid can cause vision problems, and one that grows in or near the throat or mouth can cause difficulties with breathing, eating or speaking. Similarly, a hemangioma that develops on or near the ear might cause hearing problems.

In very rare cases, the lesion may develop inside the body and seriously affect an internal organ, such as the liver, intestines or brain [source: Vascular Birthmarks Foundation]. Hemangiomas have also been known to cause internal bleeding and heart problems. Again, such cases are very rare and occur in only about 1 percent of babies with hemangiomas [source: Children's Hospital Boston].

Ulcers are a common complication associated with hemangiomas. They tend to occur most often around the mouth and in the genital area and can usually be treated with topical medications [source: Children's Hospital Boston]. They don't usually bleed, but in the rare case that they do, simply applying pressure should keep it under control.

Even though most hemangiomas don't require treatment, medical attention may be required if one is causing complications or affecting a child's everyday life. What options are available for treatment?

Hemangiomas might only affect only about 2 percent of all babies, but the number of those born with some type of birthmark is even higher. In fact, vascular birthmarks alone affect more than 10 percent of the population [source: Hochman].

Most hemangiomas won't require treatment, but there are several options available in case of any complications. From lasers to medication to plastic surgery, the treatments can do everything from reduce the size and appearance of a hemangioma to get rid of it completely.

Physicians' opinions vary on whether hemangiomas should be treated medically. Because the growths tend to go away on their own, many doctors prefer to do nothing unless there is a medical risk factor. Other doctors, however, recommend treating the growth as early as possible so the hemangioma doesn't get bigger and there is plenty of time for recovery [source: American Osteopathic College of Dermatology].

Laser treatments are one option for superficial hemangiomas. Laser treatments can reduce the lesion's red appearance, stop its growth, and possibly remove it completely [source: Mayo Clinic]. Some doctors prefer not to use laser treatments on hemangiomas, especially those that are still growing, because it can cause scarring and other negative side effects. However, in these cases, lasers may be used to treat marks left behind after the hemangiomas have disappeared on their own [sources: Cincinnati Children's, Children's Hospital Boston].

For cavernous or compound hemangiomas, medication such as corticosteroids may be injected or taken orally or topically. These drugs do well when the hemangioma is still growing, and in some cases have been known to show a difference in just a few weeks [sources: Mayo Clinic, Cincinnati Children's]. If the corticosteroids aren't working, newer treatments such as beta blockers or interferon alfa, a type of protein, might be considered [source: Mayo Clinic, American Osteopathic College of Dermatology]. Risks for steroids include irritability and swelling, and the risks for interferon may include fever, agitation and serious neurological problems.

If a hemangioma is potentially dangerous and isn't responding to laser treatment or medication, then surgery may be an option. Most doctors generally use it only as a last resort [source: American Osteopathic College of Dermatology]. Risks for surgery include bleeding, infection and scarring.

Because medical opinion varies and there is no one set course of action on how to best treat hemangiomas, the decision should be made on an individual basis.

Keep reading to learn even more information on hemangiomas.

Birthmarks affect everyone, including celebrities. Former Soviet Union leader Mikhail Gorbachev has one on his scalp, singer Tina Turner has one on her arm, and professional football player Drew Brees has one on his cheek [source: Birthmarks].

5 Things You Need to Know About Milia
What causes red blotches on the face?
Common Warts Overview