Does using a body brush daily help with cellulite?

Browse the article Does using a body brush daily help with cellulite? 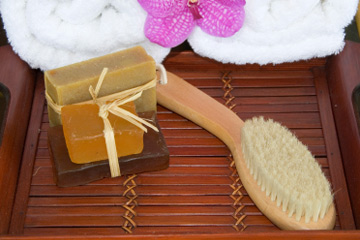 Isn't it interesting that dimples on the cheeks on your face are cute, but dimples on those other cheeks are a cause for concern? We all would like to have smooth skin, but some people have to deal with a condition that most would find embarrassing: cellulite.

Cellulite describes the uneven appearance of the skin on the thighs and buttocks. Some refer to it as dimpled skin while others go so far as to compare it to the surface of an orange peel. It affects more women than men. While cellulite is related to fat, a woman doesn't have to be overweight to have cellulite.

Many people have sought for a way to reduce or cure cellulite with little success. There are treatments on the market ranging from expensive laser and liposuction procedures to various creams designed to melt away the fat. But the truth of the matter is that no method is foolproof -- most only reduce the appearance of cellulite. And the effects usually last for a few hours or days at most.

One proposed treatment for cellulite is to use a dry body brush. The idea is to scrub the thighs and buttocks vigorously with the brush to promote nutrients and remove toxins from the skin. Even if the treatment could achieve that goal, the underlying problem is that cellulite is not caused by a buildup of toxins. It's also not the product of a lack of nutrients.

What dry brushing may do is promote the tissue to swell, which could hide the uneven dimpling effect of cellulite. While the underlying cause of cellulite remains unaffected, the temporary swelling may help the brusher achieve the appearance of smooth skin -- at least for a short time, anyway.

Let's take a look at what causes cellulite and discover why the toxin explanation is misleading.

The Skinny on Cellulite

Cellulite isn't just fat. And according to medical research, it's not a buildup of toxins in your skin, either. Instead, it's the result of a combination of the structures of skin, subcutaneous fat, connective tissue and muscle.

In addition, women have thinner skin than men. Thin skin has less resistance to the force of the fat cells pressing against it. And as we age, our connective tissue tends to become less elastic. Stiff connective tissue may make cellulite particularly difficult to shed. Even weight loss may not help because the connective tissue will stay firm -- you'd simply swap out bulges for dimples.

Because cellulite formation depends upon connective tissue, any treatment that doesn't address the connective tissue problem won't cure the condition. Without restructuring the way skin connects to muscle, the potential for cellulite will remain. Currently, the most we can hope for with cellulite treatments is to relieve the symptoms temporarily. 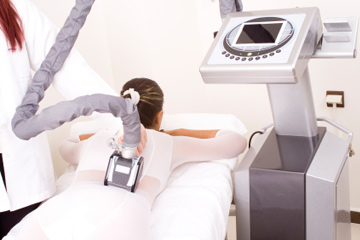 Epidermologie is another treatment for cellulite that may provide a temporary solution.
© iStockphoto.com/leventince

The persistent nature of cellulite hasn't stopped people from claiming that they have a cure for the condition. Whether their claims are based on actual belief or unscrupulous motives, the fact remains that there's still no easy way to cure cellulite. But that doesn't mean you can't reduce its appearance temporarily.

One treatment that could potentially make a cellulite problem worse is liposuction. That's because the fat provides some of the structure needed for smooth skin. Plus, if the connective tissue has lost its elasticity, removing fat may simply change bulges into dimples.

Other treatments may mask cellulite for a short time ranging from a few hours to a few days. For example, some spas advertise special massage treatments designed to reduce cellulite. But in truth, the massage causes the tissues to swell. This hides cellulite but doesn't eliminate it -- when the swelling reduces the cellulite will be visible again. The same holds true for the brushing technique.

Another treatment dating back more than a decade is called Epidermologie. This technique originated in France. It involves a vacuum and roller system designed to smooth out the skin. Patients wear stockings to protect against friction burns. While the technique may result in a reduction in the appearance of cellulite, the effect normally lasts for only 48 hours [source: Jesitus].

There are several creams on the market with containers that claim daily application will reduce cellulite. The medical evidence of the efficacy of these creams isn't encouraging. Creams designed to reduce fat cells may not be able to penetrate deeply enough to work. Other creams simply cause the tissues to swell temporarily.

Physicians are still looking into potential treatments for fat reduction and cellulite elimination. Currently, it appears that most treatments will only result in a short-lived fix. While this is discouraging news for people dealing with cellulite, it's always better to know the facts before investing hundreds or even thousands of dollars on treatments that are, at best, only good for a few days.

Learn more about skin care on the next page.