Is It Possible to Be Allergic to the Sun? 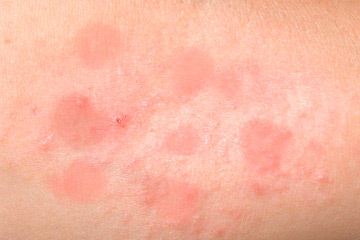 People can be allergic to almost anything — and that includes the sun. In fact, several different types of sun allergies have been identified in recent years.

Sun allergies most commonly manifest themselves in the form of a rash. The rash may be accompanied by patches of scaly skin, raised spots or even blisters and can last for days [source: WebMD]. It occurs on the exposed areas of the body, and in more serious cases, it can also spread to portions of your body that were not exposed. Unfortunately for people who have this type of allergy, it doesn't take a lot of exposure to cause a reaction; mere seconds could do the trick [source: Intelihealth].

The most common allergic reaction to the sun is called polymorphous light eruption, or PMLE. After sunburns, it ranks second on the list of skin problems caused by the sun. It can affect anyone, but happens to be much more common in women than men. There is a second type of PMLE called actinic prurigo, or hereditary PMLE. It only affects Native Americans and it is inherited genetically [source: Intelihealth]. Another type of allergy caused by the sun is solar urticaria. It is different from PMLE because instead of a rash, urticaria causes hives, which are bigger and more painful. This too occurs more often to women than men.

Ironically, some sun allergies are caused by the use of sunscreen. One or more of the chemicals in the sunscreen can react with the sun's ultraviolet rays and your skin, causing a reaction. This is called a photoallergic eruption [source: Intelihealth]. Unlike the other allergies, photoallergic eruptions might take a few days to rear its ugly head.

Now you know about some of the more common allergies associated with sun exposure. Check out the links below for lots more information.