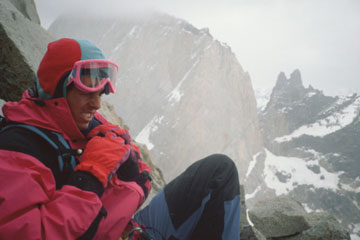 Frostbite is associated with snowy regions, but you can get it just by being exposed to freezing temperatures in less extreme locales. See pictures of skin problems.
Greg Epperson/Workbook Stock/Getty Images

Rulon Gardner was an unlikely, but likeable, bear of a wrestler whose story seemed to epitomize the Olympic dream. The son of a Wyoming dairy farmer, Gardner never finished higher than fifth in international competition. But at the 2000 Summer Olympics in Sydney, Australia, he stunned a global audience by toppling the reigning Russian champion to earn a gold medal in Greco-Roman wrestling [source: Sports Illustrated].

Just two years later, Mother Nature took Gardner to the mat. He became stranded while snowmobiling on a 10,745-foot (3,275-meter) mountain peak in Wyoming and spent 17 hours in temperatures that dipped to negative 80 degrees Fahrenheit (negative 62 degrees Celsius). By the time rescuers found him, Gardner's clothes were frozen to his body, and frostbite -- damage to the skin and underlying tissues caused by extreme cold -- had taken its toll [source: National Institutes of Health]. He survived the ordeal, but a toe on his right foot had to be amputated.

Injuries like Gardner's seem to be more common than ever. Although frostbite began much of its documented history as a malady only of soldiers (10 percent of American casualties in World War II and the Korean War were the result of frostbite), it now also affects outdoor sporting enthusiasts and spectators throughout the world [source: Bjerke].

In the United States, there's no standardized reporting system to track frostbite cases, so the number of people it impacts is largely unknown [source: Mechem]. However, people who practice cold weather sports, like Nordic skiers, are at greater risk, as are the homeless, elderly and young (children's smaller limbs put them at higher risk) [source: Doerr]. As one might expect, the closer the proximity to snow-capped mountains and other snow-prone regions, the more common frostbite becomes. In Iran, for example, frostbite injury is reported in as much as a third of the mountaineering population [source: Harirchi].

No matter the latitude, cold weather injuries, which include frostbite, are most common among men age 30 to 49, perhaps because they engage in outdoor activities with greater frequency [source: Bjerke]. People of African, Pacific Islander or Arab descent also appear to be at greater risk for frostbite [source: Mechem]. Regardless of ethnicity, soldiers who are used to warm climates report a higher incidence of frostbite [source: Giesbrecht].

As for Gardner, it's likely the positive mental attitude that cemented his debut Olympic bid also made a difference on the mountain. After being rescued and recovering from frostbite injuries, he continued to compete and even earned a bronze medal at the 2004 Olympics. Some may attribute his success to luck, but his physical fitness also gave him a better-than-average chance of avoiding more serious injury associated with frostbite. We'll tell you why, next.

Have you ever held an ice cube in your hand? The cold, prickly sensation you felt in your fingers was an early sign of frostbite. Of course, the cube probably melted before any damage to your skin or tissue could occur. But what if you were surrounded by ice and snow, like on the peak of a mountain? The situation could be a lot more serious. Even if you were dressed for the weather, prolonged exposure to the cold would allow frostbite to set in. The symptoms would begin with tingling and burning, and progress to numbness and blistering of the skin and hardening of the tissue underneath. Because frostbite has to do with blood circulation, the areas of your body most at risk would be those farthest from your heart, such as the hands and feet [source: Bjerke]. In some cases, frostbite can occur on the lips, nose and ears.

But what if you're exposed to the cold in a more everyday environment? Even ordinary activities such as shoveling the driveway or helping the kids build a snow fort can take a surprising toll. That's because frostbite can set in before you even know you're in danger. In fact, it takes longer to watch your favorite sitcom than it does for your skin to freeze when the wind chill reaches negative 28 degrees Fahrenheit (negative 33 Celsius) [source: Environment Canada]. How does all this happen?

Frostbite is the result of an internal process designed to save your life in cold conditions by sacrificing your limbs. The hands and feet contain microscopic junctions between arteries and veins. They're called arteriovenous anastomoses and they act as valves to control blood flow. Just as you can regulate the flow of tap water from a kitchen spigot by adjusting the handle, these junctions adjust blood flow to the extremities. How is this related to frostbite? When your body gets too cold, the arteriovenous anastomoses shut down blood flow to your hands and feet to keep your core temperature steady [source: Cheng]. Without the warm blood to keep tissues toasty, your toes and fingers are apt to freeze -- fast.

Plus, when your skin is exposed to freezing temperatures, ice crystals form in the spaces between cells. The freezing process dehydrates the cells' interiors and damages the skin and underlying tissue [source: Stoppler]. Combine cold temperatures with prolonged exposure and other harsh conditions, such as an oxygen-depleted altitude, and the risk for limb-altering frostbite increases [source: Mechem].

In Gardner's case, his odds of survival were better than the average person's. Why? Muscle mass, for starters. By using his large muscles to move, Gardner could create internal heat to encourage blood flow. Plus, years of athletic training and competition had accustomed his veins to infuse tissues with blood at a moment's notice [source: Speik]. Even so, Gardner's frostbite caused burn-like damage and the loss of a toe. He could have faced worse side effects, though. Up next, which we'll explore other consequences of frostbite and how to treat them.

The four categories of frostbite, organized by the amount of damage caused, include the following:

If you get frostbite, the course of treatment is simple: Rapidly warm the frostbitten areas with warm water (usually about 104 degrees Fahrenheit). If the water is too cold, fragile tissue will sustain further damage. Too hot and the water could injure the skin. Why water? Frostbite causes a loss of sensation, and dry heat, such as a heating pad, could burn the skin before you even realize it [source: Time].

A blood-thinning medication may also help frostbite victims. The June 2007 issue of Archives of Surgery reported promising results from a small study using the anti-clotting agent to improve blood flow and reduce the risk of amputation as patients recovered from severe frostbite [source: Minkel]. But not everyone is a good candidate for this type of therapy. Head injuries and other medical conditions preclude the use of blood thinners [source: WCCO].

After frostbitten tissue is warmed, the next biggest risk is infection; this means remaining in a sterile environment is vital. Other than that, recovery is a waiting game. The once-frozen tissue will swell and turn red. It may even blister and become blackened. Dead tissue will need to be removed. Sometimes this results in amputation.

When it comes to frostbite, knowing what not to do is essential to successful treatment. Keep frozen tissue away from heat sources until it can be thawed rapidly. Slowly thawing the tissue causes limb-altering damage. So does letting tissue thaw and refreeze. And, unlike in the snowy rescue scenes in movies, do not clap frozen hands together to warm them. Hitting or massaging the frozen tissue adds to the damage. So does walking on frozen feet [source: WebMD].

Even with timely, by-the-textbook treatment, frostbite can create long-term complications. Although some people with minor injuries recover completely, others with deeper tissue damage may have continued pain or numbness in once-frostbitten areas. The skin may never regain its original color and arthritis or skin cancer may develop [source: University of Maryland Medical Center].

The best treatment is to avoid frostbite in the first place. We'll tell you how to prevent it, next.

Want to prevent frostbite? Then stay out of the cold. Unfortunately, this is deceptively simple advice, especially for the thousands of people whose work commitments put them at the mercy of the elements -- not to mention the hobbyists who enjoy cold-weather recreation. If you're one of those, then frequent, high-carbohydrate meals and snacks will give your core temperatures a boost, as will warm liquids. And even if you don't plan to spend more than a few minutes outside, it's vital to wear insulated footwear, gloves and a hat. Dress in layers, using a thin, breathable set of thermal underwear for a base. Top this with a loosely fitting middle layer to act as insulation. Finally, add an outer layer to prevent snow, rain or wind from penetrating your clothing. It's important to stay dry as well as warm [source: EHS Today].

You can also lessen your frostbite risk by keeping medical conditions in check. Diabetes, circulatory diseases and thyroid conditions should be closely monitored at all times, but especially when you plan to spend time in the frosty outdoors. Drinking alcohol or taking illegal drugs also increases your odds of cold-weather injury, because you're not as likely to realize you're in danger when you're impaired [source: Doerr]. Plus, alcohol lowers your internal body temperature while simultaneously making you feel warm. That's because taking a sip (or two) of alcohol makes blood rush to the skin's surface, leaving your core to cool to dangerous levels [source: Haynes].

Think a cigarette will warm you up? Quite the opposite. Researchers from Yale University discovered smokers have a greater risk for frostbite. That's because nicotine makes the body respond to cold in slow motion; a smoker's blood simply doesn't flow through the vessels fast enough to warm cold digits [source: BBC News]. It's also a myth that being overweight offers "extra insulation" against the cold. The truth is, too much fat dulls nerve endings that would otherwise tell the body to generate more heat [source: Swank]. You'd be better off to have more muscle than fat because muscle does a better job maintaining body heat -- a fact that probably helped Gardner survive his harrowing mountain ordeal.

If you're stranded, keep moving. Even if you don't leave the location, frequently putting your arms and legs in motion can improve circulation. And, don't fall asleep. If you do, you'll be more vulnerable to cold-weather injuries, like frostbite [source: Centers for Disease Control and Prevention].

Want to know more about how to survive frostbite and other cold-weather conditions? Explore the links on the next page.

Why You Can't Freeze to Death

Stay outdoors with exposed skin in chilling temperatures, and you'll almost certainly get frostbite. Freezing to death, however, is another story. Long before cold temperatures actually freeze your body, hypothermia creates a metabolic kill-switch. The body typically operates at a balmy 98.6 degrees, but when it drops below 95 degrees, hypothermia sets in [source: Rettner]. Hypothermia differs from frostbite because it involves a cooling of core body temperatures, whereas frostbite is the freezing of the extremities in order to keep your core warm and avoid hypothermia [source: American Red Cross]. But when hypothermia strikes, the colder you get, the fewer mental faculties you'll have left. And by the time your core drops to 70 degrees, you're more likely to die than survive the cold spell.

How Whole-Body Cryotherapy Works
What are chilblains?
First Aid Overview