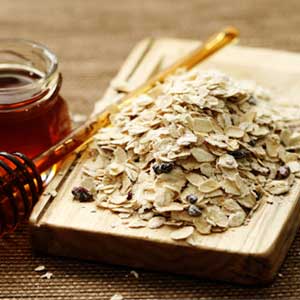 There are lots of reasons to love oatmeal. It makes a delicious breakfast, warming you up on cold winter mornings, and it can also be added to pancakes or bread for tasty, fiber-filled versions of some of your favorite foods. If that weren't enough to make you love oatmeal, research shows that it's one of the best foods for lowering cholesterol and helping prevent heart attacks [source: Mayo Clinic].

It turns out oatmeal is just as good for your outsides as it is for your insides. This cereal staple has as long a history in health and beauty treatments as it does on the breakfast table. This is because oatmeal functions as a skin protectant -- it protects the skin from irritants and helps soothe skin that's itchy, painful or irritated [source: Cosmetics Info].

In the health and beauty world, oatmeal goes by two names. When it's used as a skin protectant in over-the-counter treatments, such as oatmeal bath products used for treating chickenpox or other skin conditions, it's called colloidal oatmeal. When used in cosmetic products, such as lotions or facial masks, it's often referred to as Avena sativa (oat) kernel meal [source: Food and Drug Administration].

Although oatmeal has a variety of uses, one of its most popular applications is as a folk remedy in the treatment of poison ivy. In fact, it's so popular that you probably know someone who swears by it. Read on to learn how oatmeal tames the itch caused by poison ivy.