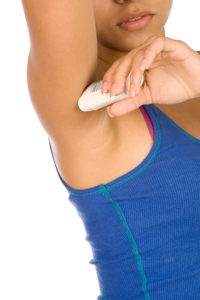 When times are tough, people will make certain sacrifices so that they can still pay their mortgage and put food on the table. So let's say you're on a tight budget, but you're still willing to plunk down a few dollars on deodorant. That's not hard to justify; after all, every deodorant commercial is a cautionary tale of the humiliation that will ensue if you're not outfitted with the absolute best deodorant. Such advertisements feature men who can't get a date because of white marks on their shirts and women who can't catch the bouquet at a wedding because lifting their arms would spell certain odor disaster.

So there you stand in the deodorant aisle, hoping to find a product that will get the job done without breaking the budget. Your eyes are drawn to tags advertising the deodorants that are on sale, but all of the discounted deodorants claim to work for the opposite gender. If you're a guy, do you suck it up and pay extra for a product meant for other men, or do you walk around with deodorant designed for ladies?

This conundrum was presented to the folks at CBC's "Street Cents" show, and they found several price disparities between men's and women's deodorant. However, in both the male and female deodorants of a certain brand, the active ingredient was exactly the same and was present in the same amounts [source: CBC]. That means that all those extra pennies go toward is fragrance and gender-specific packaging. The fragrance may differ between a man's and a woman's deodorant, based upon cultural norms and general preferences (for example, you may be more likely to find lavender in a woman's deodorant and leather in a man's), but the other ingredients are the same. As the people behind Street Cents concluded, it's perfectly acceptable for a man to wear a woman's deodorant (or vice versa) to save a little money.

A good bargain may not even be necessary for men to get interested in their girlfriends' products; Forbes reported in 2007 that of the 70 percent of men who use antiperspirant or deodorant, 5 percent of that group wore deodorant geared toward women [source: Rovzar]. So why are there different deodorants for the genders in the first place? 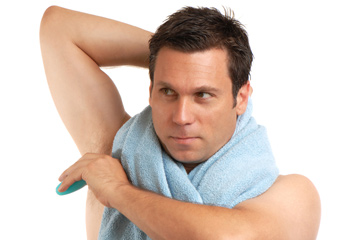 No girls allowed? Not when it comes to deodorant.
©iStockphoto.com/Eric Wood

The only reason that manufacturers offer men and women different deodorants is to make more money. Men's deodorants are not stronger or in any other way different than women's deodorants. In the early 1990s, unisex deodorants made up about one-third of the marketplace, but today, they only account for 10 percent of sales [source: Howard]. People are more likely to buy things they feel are targeted directly toward them, another reason why you may see deodorant marketed towards teens.

That's not to say that men and women don't have different preferences for deodorant products, though. For example, roll-on deodorants modeled on ballpoint pens were extremely popular when they were first introduced in the 1950s, except with men who found that underarm hairs tended to get caught in the applicators (men are much more likely to stick with a solid stick or gel) [source: Ramirez]. And offering consumers a greater variety of scents is a good option, particularly because the genders may interpret body odor differently.

It's not that men produce a greater stink than women, but it may be harder for men to hide their body odor from their ladies, according to new research from the Monell Chemical Senses Center. In a 2009 study, researchers found that women are more sensitive than men to the smell of underarm sweat [source: Wilbert]. When researchers presented vials of sweat combined with perfume samples, mimicking the cover-up deodorant is designed to provide, the women could still smell the body odor. Only nine fragrance chemicals could mask a man's musk, while 25 chemicals covered up female sweat odor [source: Monell Chemical Senses Center].

The researchers think that women are more sensitive to the men's odors because they have the ability to smell out useful information about mating (information more useful than whether a man showers). It's possible that women can sense when a man has different major histocompatibility complex (MHC) genes than she does. Studies have shown that having different MHC genes from one's partner plays an important role in sexual attraction, marital happiness and reproductive success [sources: Kaplan; Bryner]. So if a woman is always urging her special fellow to try out a new deodorant because she doesn't like the one that he has, it may not be a new deodorant that's needed, but rather a new man.

Does shaving your armpits reduce sweating?
Quick Tips: 5 Ways to Treat an Underarm Cyst
How do deodorants keep you from stinking?