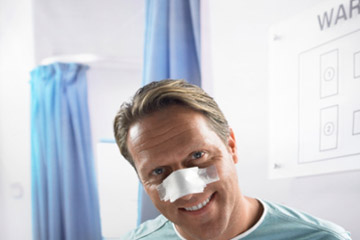 Plastic surgery may seem like the answer to a litany of physical imperfections, but what if you don't like the results?
Adam Gault/Getty Images

We're all beautiful in our own ways, but most of us weren't lucky enough to be graced with the kind of face that would look right at home on the cover of a fashion magazine. No, we all have our little imperfections—a nose that hooks slightly to the right, lips that aren't quite plump enough, breasts that droop instead of perk up. And even those lucky few who were born with the kind of face that could stop traffic sometimes find they don't get the same kind of attention once age and gravity intervene, leaving behind its veil of unsightly wrinkles, lines and spots.

The quest for and desire to re-attain physical perfection--or just the simple need to feel better about ourselves--is what sends more than 1.6 million of us to plastic surgeons annually, at a cost of almost $6.6 billion every year. The majority of plastic surgery seekers come in search of more voluminous or petite breasts (breast augmentation or reduction), trimmer thighs and tummies (liposuction and abdominoplasty), and younger-looking eyes (eyelid surgery) [source: American Society for Aesthetic Plastic Surgery].

Plastic surgery may make us look better, but it won't necessarily make us happier. After the bandages are removed and the physical scars have healed, the emotional wounds that prompted the surgery can still linger. Having an expensive procedure can't cure the insecurity and self-esteem issues that bring people to their plastic surgeon in the first place. Surgery side effects and botched results can lead to temporary, or longer-term sadness. Plastic surgery has even driven some people to the point of suicide.

Why do some people get depressed -- even despondent -- after their plastic surgery? Read on to find out.

If a certain part of your body is making you unhappy, and you have that body part surgically altered to improve its appearance, you should feel better, right? You should, but don't count on it: Research has found that about 87 percent of people are happy with the results of their surgery and have improved self-esteem afterward, but a smaller percentage are still dissatisfied after their procedure [source: Aesthetic Surgery Journal].

Even after a successful surgery, you may feel tired and uncomfortable during the healing process. Both the anesthesia you were given during the procedure, and the medicines you take afterward to control pain can cause some of the effects of depression -- including fatigue, disorientation, and difficulty concentrating.

When you're expecting physical improvement, it can be hard to look at a swollen face covered in bandages. Once the bandages come off, you may not like what you see right away. It can take weeks -- or even months -- for the swelling to subside and the wounds to heal enough for you to see the real results. During that time you might wonder, "Will I ever look good again?" Even if the surgery was technically a success, the end results may not be what you had expected.

When personal trainer and author Laura Pillarella had a chin implant and eye procedure, her response when the bandages came off was disappointment. "I wasn't beautiful -- just different. It wasn't enough," she told the Daily Mail. Fifteen procedures later, Pillarella had become so disheartened that she considered ending her life [source: Mail Online].

Some women, like Pillarella, sink so far into the depths of despair after plastic surgery that they consider suicide. Studies have found that the suicide risk is three times higher among women who have undergone breast augmentation than in the general population [source: Annals of Plastic Surgery]. Researchers don't know exactly why this is, but it may be that the women who undergo plastic surgery already have emotional conditions that predispose them to suicidal thoughts.

Who's at greatest risk for depression after plastic surgery? Click to the next page to find out.

Who's Most At Risk for Depression After Plastic Surgery? 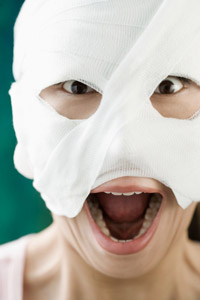 Are you a candidate for the post-surgery blues?
Blend Images/Jon Feingersh/Getty Images

Some people sail through their plastic surgery with no problem. But certain groups of people don't feel any emotional relief--and may be more likely to experience depression after their plastic surgery [source: Plastic and Reconstructive Surgery]. Who's likeliest to get the post-surgery blues?

These groups of people may need to be counseled before having surgery. Also, careful screening before surgery can ensure that the right candidate is paired with the right procedure.

On the next page, you'll learn how to go into your plastic surgery with the right expectations so you won't walk away unhappy afterward.

No one can guarantee that you'll be thrilled with the results of your plastic surgery, but there are steps you can take to get the best possible results--both physically, and emotionally.

Before your surgery, make sure you do the following:

Remember that plastic surgery can only change your exterior -- it can't cure the self-esteem problems and depression inside. If your sadness goes on day after day, get help. Talk to a psychologist or counselor about getting treatment for your depression. Studies on heart surgery patients with post-surgical depression have found that cognitive behavioral therapy (CBT) can help. During this treatment, a therapist helps you understand the problems that are causing your depression, and then works with you to help overcome those problems [source: Archives of General Psychiatry].

What's the Worst Fad Diet Ever?
Reflexology: Bogus, Beneficial or a Bit of Both?
Why Is It So Hard to Make a Universal Flu Vaccine?