Eating on the Go 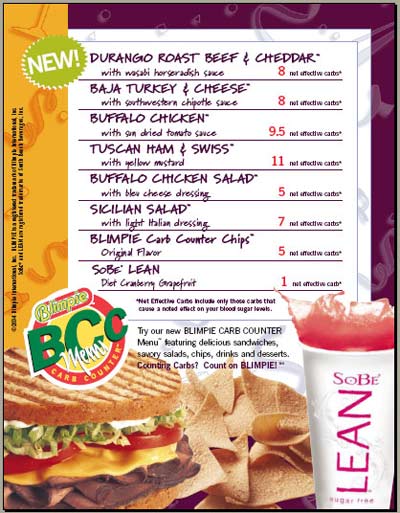 In response to the low-carb craze, many fast food restaurants have added low-carb options to their menu -- McDonalds has low-carb alternatives, as does Subway, Burger King, Hardee's, Arby's and Blimpie. Let's take a look at Blimpie and their new carb counter menu.

Blimpie is a company that has -- for four decades -- been known for subs and sandwiches made with just-cut meat and cheese and vegetables on freshly baked bread. While the meat, cheese and veggies are totally in-line with the average low-carb plan, the thing that literally holds it all together isn't.

The fast-food industry is one of convenience. And, what if anything, could be more convenient than a sandwich? It's a quick, well-rounded meal all encased in its own edible wrapper. Ah, but there's the low-carb rub -- the wrapper. Most anyone even remotely familiar with low-carbing knows that regular bakery bread is enemy-number-one. So, what's a fast-food company to do? The easiest thing to do is eliminate the bread and serve salads. But, for restaurants like Blimpie that know which side their bread is buttered on -- the sandwich side -- going solely for the salad seems to give their regular clientele short shrift. So, the folks at Blimpie went straight to the heart of the problem by finding a low-carb bread to house the normal Blimpie fixings. Now, the low-carb customer can still feed his or her Blimpie craving with a hearty sandwich without missing a thing -- well, except all those extra carbs. With four sandwiches to choose from and two salads for good measure, there's some variety. Here's what you'll find on the Blimpie Carb Counter menu:

All of the sandwiches are served on the 7-grain onion low-carb bread.

No matter what phase, level or stage you're in of your low-carb plan, there's pretty much something here for everyone. For example, during the initial phase of the Atkins plan (the most stringent of the four phases), you're not supposed to have any bread, period. And, with a maximum of 20 carbohydrates daily, there's no wonder why. The Buffalo Chicken Salad would be a good selection for lunch or dinner with 15 carbs to spare for the remaining meals and snacks for the day. Meanwhile, for folks who have met their weight loss goal and are trying to maintain their new svelte selves -- that's easily done with any of these menu items.

The amount of carbs someone can consume to maintain their weight varies -- but on average, it's anywhere from 40 to 80 grams of carbohydrates. So, even by going for the highest carb item and the chips too, your meal would remain well below 20 total carbs:

Of course, you can reduce the carb counts even more on any of these menu items by simply switching the condiments around. Usually sauces cost you at least a carb or two, sometimes even three. Replace the wasabi horseradish with plain old mayo and you'll probably save a couple of carbs. And, with the meals you can skip the SoBe drink and opt for a glass of ice water, unsweetened tea or a diet soda and save another carb. Reportedly, several of the Blimpie locations are also offering a brownie -- yes, that is the well-loved chocolate baked good. And -- drum roll, please -- because the brownies are made with a sugar alcohol, it supposedly has no net carbs. Zero, zilch, nada, nothing.

For those of you who aren't lucky enough to have a Subway, Arby's, Hardee's or Blimpie nearby, you can take your cue from these accommodating fast-food eateries and give low-carb convenience a try in your own kitchen. You can get fresh-cut meat and cheese from the deli counter at the local grocery, an ample supply of veggie fixings like lettuce, tomatoes, green and red peppers, cucumbers and sprouts and some kind of low-carb bread. You might even be able to find some soy chips, too!

For more information on the low-carbing lifestyle, low-carb fast-food dining and related topics, check out the links on the following page.