Browse the article When We Lose Weight, Where Does the Lost Weight Go? 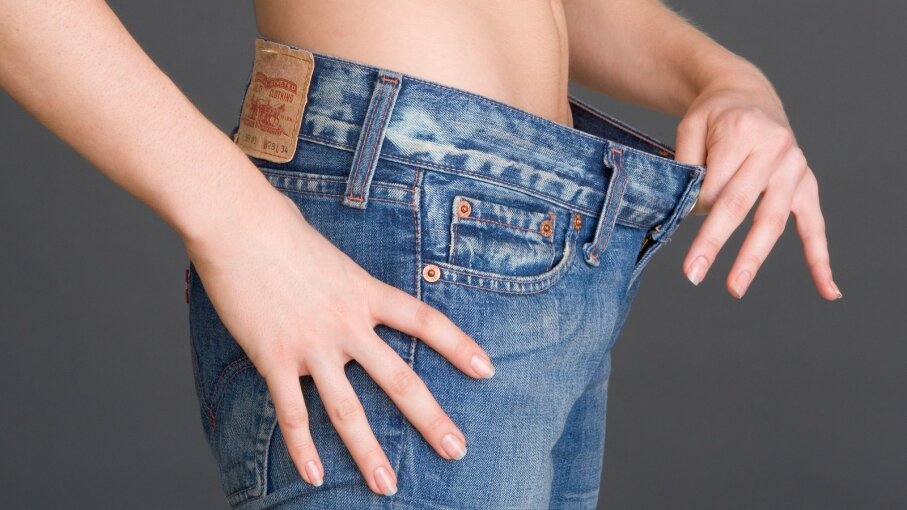 To lose weight, you must burn more calories, or energy, than you consume. Tim Platt/Getty Images

After weeks of trimming a few calories here, exercising a little more there, you put on a pair of jeans, and like magic, the waist has grown. You button them up to behold a welcome space between your belly and the fabric. How did that happen?

With 78.3 percent of the adult American population defined as overweight (32.7 percent), obese (37.9 percent) or extremely obese (7.7 percent) according to 2013-14 stats from the Centers for Disease Control and Prevention, a lot of people are trying to drop some pounds. Through dieting, exercise, surgery or a host of other alternatives, they hope to reach the goal of a smaller body. But where does that weight disappear to when the hard work pays off?

The short answer is that our bodies convert molecules in fat cells to usable forms of energy, thus shrinking the cells. But getting this to happen isn't just about sweat bands and short shorts. Understanding how our bodies perform this tummy-trimming trick requires a little more detail.

We know that weight loss hinges on burning calories. Calories measure the potential energy in food you eat in the form of fats, proteins and carbohydrates.

If our bodies were cars, energy would be the gas that keeps everything running. Lounging in front of the television is like cruising the strip, while sprinting around a track is more like drag racing at maximum speeds. In short, more work means more energy.

The body uses some of those calories to digest food. Once the food is broken down into its respective parts of carbohydrates, fats and proteins, it either uses the remaining energy or converts it to fat for storage in fat cells. Fat cells live in adipose tissue, which basically acts like an internal gas station, storing away fuel reserves.

To lose weight, you must burn more calories, or energy, than you consume to start using up that fuel reserve. Essentially, you're not ingesting enough calories to fuel your additional exercise, so your body must pull from fat stores.

How? Go to the next page to get the skinny on the fat-burning process.

How We Burn Fat

Fat cells lie behind how you gain and lose weight.
HowStuffWorks.com

According to the law of conservation of mass, matter is neither created nor destroyed, but it may alter its form through chemical reaction. Essentially, that tells us that while we lose mass in our bodies by burning up fat, it does not just disappear. It simply changes form, like water and steam.

When we eat, the glucose and other sugars harnessed from carbohydrates are the first fuel sources. The liver stores the glucose in the form of glycogen and releases it into the bloodstream as necessary to keep our body trucking along. Think of your bloodstream as an interconnected conveyor belt that takes necessary nutrients to the body parts that need them. Once that glucose runs out, fat takes over. Harnessing energy by burning fat is referred to as ketosis.

Hormones regulating our blood sugar levels activate an enzyme in the blood vessels of fat tissue called lipase. Lipase ignites fat cells to release macromolecules called triglycerides, which are what make fat cells fat. Triglycerides are made of glycerol and three fatty acid chains. When they receive the signal from lipase to exit the fat cells, the triglycerides break up into their respective components and enter the bloodstream for use. The liver snatches up the glycerol to break it down for energy, and some of the fatty acids move to the muscles that can farm them for energy as well.

This action of breaking down triglycerides into usable energy is called lipolysis. Once inside the mitochondria, or power source, or muscle or liver cells, the components of the glycerol and fatty acids are shuffled and reshuffled to harness their energy potential, producing heat, water, carbon dioxide and adenosine triphosphate (ATP). ATP hauls potential energy in its molecular bonds for use when we exercise like cellular carb loading. The water exits our bodies as sweat and urine, and we exhale the carbon dioxide.

Now that the body has relieved fat cells of some glycerol and fatty acids, the cells get smaller. But if the fat tissue shrinks, what happens to our skin? 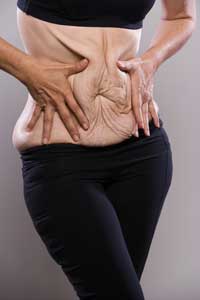 Massive weight loss can leave you with extra skin because it has lost elasticity.
Juan Silva/Getty Images

If our jeans hang loose when we lose weight, it would make sense that our skin would as well. In cases of moderate weight loss, our skin shrinks back to fit the body's new size, thanks to its elasticity. A protein called collagen in the skin gives it this special property, which helps explain how we don't outgrow our skin as we get older. But as we age, these collagen fibers in the skin do weaken, leading to wrinkles.

Collagen does have its limits. Rapid growth or weight gain can outpace collagen production in the skin, causing areas to overstretch. This can lead to striations called stretch marks. These are particularly common with pregnancy and adolescents going through puberty. Although several lotions and creams on the market claim to get rid of stretch marks, most naturally go away on their own.

Sometimes in cases of massive weight loss, people have folds of extra skin left over from their heavier days. Their skin had become so outstretched that it hangs limply from the thinner body, like worn out elastic.

As the number of obese people undergoing gastric bypass surgery increases, so do corrective surgeries for the unwanted and often uncomfortable loose skin. Although it may seem purely cosmetic, extra skin can actually cause infections, rashes and back problems. Since it's a highly invasive procedure, plastic surgeons may space out skin tucks and removals over months or a year. A tummy tuck costs $5,798, on average, according to 2016 stats from the American Society of Plastic Surgeons. That figure does not include the cost of anesthesia and operating room facilities or other expenses.

Even after the work is done, patients wear lifelong scars from the surgeries. Also, this type of body recontouring comes with risks. Since it's a relatively new procedure, doctors only know anecdotal evidence of complications, including dead skin, infection and open wounds [source: Singer]. But as beltlines continue to bulge, the numbers of patients will likely increase as it has the past decade.

To chew the fat on weight loss some more, head on to the next page.