Can I get cancer from one cigarette? 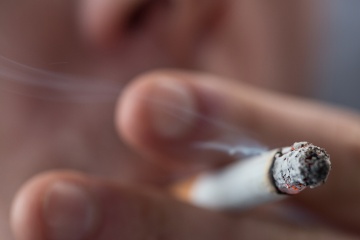 According the 2010 U.S. surgeon general's report on how tobacco smoke causes disease, "there is no risk-free level of exposure to tobacco smoke."
Wavebreakmedia Ltd/Thinkstock

An impressionable teenager takes a drag from a friend's cigarette and ends up in the cancer ward five months later. It sounds like the makings of the world's worst after-school special, but this fictional scenario is simply an exaggerated version of the response to the 2010 U.S. surgeon general's report on the dangers of cigarette smoking. News headlines at the time were nearly as sensational, with many publishing the dire warning: "One Cigarette Can Kill You!"

It's a well-documented fact that cigarettes are highly harmful and can increase a person's risk of everything from heart disease to lung cancer. However, it's a bit of an overstatement to say that a single cigarette can be the one and only nail in the coffin. If you look closer, you'll see there are more practical interpretations of the information in the surgeon general's data.

For instance, the report states that a single cigarette puff introduces around 7,000 chemicals into the body [source: HHS]. Research has shown that such substances can have a destructive effect on DNA. Hypothetically, this type of cell damage, occurring even once, could pave the way for cancer and other diseases down the road. Still, there is currently no recorded data definitively linking one cigarette to an incidence of cancer. Considering that cigarettes are highly addictive, however, it's possible that one cigarette can be the precursor of a lifelong habit that goes on to wreak havoc in the body.

Another way to consider the danger of a single cigarette is to look at it this way: If a person already has a serious health condition like asthma or COPD, or is at high risk for heart disease or stroke, smoking even one cigarette could, theoretically, cause that person to experience a health emergency. Cancer, however, is generally assumed to result from cumulative damage and won't activate suddenly from one event.

As with all cautionary tales, hyperbole sometimes plays a role in anti-smoking messages. Cancer is a complex disease with multiple potential risk factors, including personal behaviors and genetic predisposition. That doesn't mean there isn't valid and extensive research connecting tobacco smoke with cancer risk; it just means you don't have to start making funeral arrangements because of that one cigarette you had at a party five years ago.

In fact, it might encourage you to know that the human body has an amazing ability to repair itself. Even long-time smokers can experience health improvements by quitting. According to the U.S. Department of Health and Human Services, the carbon monoxide in your blood returns to normal within just 12 hours after your last cigarette [source: WomensHealth.gov]. And after not smoking for 10 years, your risk of death due to lung cancer is half that of other smokers [source: WomensHealth.gov]. So even if you didn't heed the surgeon general's warning in the past, you can still benefit from doing so now.

Explore the headlines (and research) for yourself by reading the next page.

What's Scarier: No Toilet Paper or Wiping With One of These 5 Alternatives?
Are humans built to drink milk as adults?
Mushrooms: Natural Weight-Loss Foods