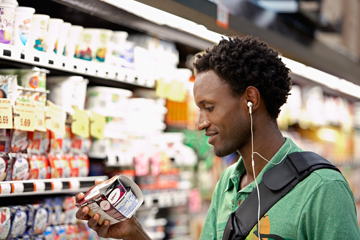 The 2,000-calorie standard came about thanks to a 1990 U.S. Food and Drug Administration mandate to include nutritional labels on packaged foods.
Fuse/Getty Images

Ryan is a calorie counter. When he decided to lose 30 pounds three years ago, he began to track every calorie he ingested. It's a practice he continued, even as he successfully maintained his weight. Everything earns a spot in the small notebook he carries everywhere he goes. At the end of the day, he adds up all his calories. His goal is to keep his daily caloric intake at 2,000 calories.

This 2,000-calorie standard stemmed from a U.S. Food and Drug Administration mandate to include nutritional labels on packaged foods. The Nutrition and Labeling Act, introduced in 1990, was designed to standardize food labeling that previously had been at the discretion of manufacturers and individual states. The federal food labeling requirements meant manufacturers had to list information like ingredients, calories and serving sizes [source: FDA].

These labels also allowed consumers to compare the amounts of saturated fat and sodium, in addition to vitamins and minerals, to the "daily values," which are the maximum amounts of recommended intake per day. Before the FDA labels were instituted, there wasn't a standard caloric intake that remained the same across the board for every consumer, making this daily value difficult to determine.

The FDA realized that caloric needs varied by gender, age and activity level, but they also knew it would certainly take too much space on a label to print the daily values for consumers in a variety of calorie-intake ranges. So the FDA turned to USDA food consumption surveys, which reported the calorie intake of men, women and children. According to the surveys, men ingested 2,000 to 3,000 calories a day, women ate 1,600 to 2,200 calories a day, and children took in 1,800 to 2,500 calories a day. To simplify the food labels, the FDA proposed using a single amount on all labels: 2,350 calories a day [sources: Nestle].

Although several studies had shown that many men and women needed more than 2,350 calories on any given day, setting that amount as the standard was met with criticism by those who believed it would cause people to overeat or ignore the standards altogether. Instead, the formula was simplified to include a percentage of daily values based on a 2,000-calorie diet. That nice, round number that was a more effective tool for education, the FDA concluded. Plus, it mirrored the calorie requirements for postmenopausal women, who were viewed as a segment of the population most likely to have weight gain [sources: Nestle].

To assess individual calorie requirements, the FDA knew people would need to adjust the 2,000-calorie mark for age, gender and activity level. Whether that responsibility translated to the general population is still being widely debated [sources: Nestle, Zeratsky]. So although a 2,000-calorie diet may be the ideal amount for some, it's definitely not going to be right for everyone.

Are fats actually good for you?
6 Anti-inflammatory Foods You Should Be Eating
Could soup be a runner's best friend?