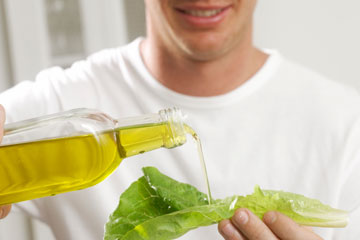 People don't usually associate the words "fat" and "oil" with anything healthy. But, in fact, not all fats are bad for you. It makes a lot of sense to learn the difference between good and bad fats, since the fat in a person's diet affects his or her cholesterol levels, which in turn can affect heart health.

In the United States alone, cardiovascular disease killed more than 830,000 people in 2006, accounting for 34.3 percent of all deaths in the country [source: American Heart Association]. Fortunately, one of the simplest ways to help prevent heart disease is by making smart choices when it comes to diet, particularly in terms of the fats consumed.

Cutting fat out of a diet completely is not the answer. Fats should actually account for 20 to 35 percent of a balanced diet [source: U.S. Department of Health and Human Services]. The trick is to make sure that this percentage consists of the right kinds of fat, which means steering clear of saturated and trans fats. One of the best and healthiest alternatives to these heart-hostile fats is canola oil, a vegetable oil made possible by a plant that didn't even exist a half-century ago.

The name "canola" is actually a contraction of "Canadian oil, low acid", which is a fairly accurate description of this versatile oil. In the 1960s, a group of Canadian scientists used traditional plant breeding methods to derive the canola plant from rapeseed, which was already being used to produce non-edible oils. The breeding techniques allowed them to eliminate erucic acid and glucosinolates, both of which are found in rapeseed and can be toxic to humans. The result was canola, a yellow flowering plant classified in the Brassica family -- the same vegetable family as cauliflower and cabbages. Pressing the flower's tiny seeds yields canola oil.

With its neutral taste and high heat tolerance, canola oil works well in salad dressings, sauces and marinades, and it also provides a good base for sautéing, grilling or stir-frying meat and vegetables. For bakers, canola fulfills dual purposes, as both a substitute for solid fats, such as butter, and as an effective non-stick agent for pans. Best of all, canola does all this while still maintaining its status as a good-for-you oil. In order to understand what makes canola oil "good," we have to look at what it is actually made of.

The key quality that sets canola oil apart as a healthy oil is its low level of saturated fat -- in fact, it's the lowest level of any oil derived from plants. Saturated fats are the cholesterol-raising, artery-clogging, heart-disease-inducing kinds of fats to avoid. Foods like cream, butter, cheese, lard and fatty meats have high percentages of saturated fat. Imagine bacon cooked in butter -- that would be a saturated fat fest! In comparison, canola oil with its 7 percent saturated fat content is much easier on the arteries and, by extension, the heart [source: CanolaInfo].

But how exactly does this combination of low saturated fat and high unsaturated fat translate into good health for people who use canola oil in their cooking? Read on to find out.

Canola oil is sometimes wrongly accused of being a product of rapeseed, a plant that contains erucic acid and glucosinolates, both of which can be toxic to humans in large quantities. It's true that the canola plant has a close connection to rapeseed -- you could say rapeseed is the parent of canola. But, much like parents and children, rapeseed and canola have very different qualities. A federally and internationally regulated definition of canola states that it contains less than 2 percent erucic acid and less than 30 micromoles of glucosinolates [source: U.S. Department of Agriculture]. Anything containing more than these amounts would not be certified or labeled as canola.

By now, you know that unhealthy saturated fat can lead to higher cholesterol, clogged arteries and a whole host of serious heart problems. So the simplest and most basic way that canola oil contributes to good heart health is by offering people a heart-healthy alternative. By using canola oil as a substitute in recipes that call for cholesterol-raising fats, such as butter in a cake or the fat used to sauté fish or mushrooms, people can reduce their saturated fat intake. This, in turn, can help to keep cholesterol at a healthy level and reduce the risk of heart disease.

But canola oil can also be a proactively good ingredient for your heart, not simply a replacement for unhealthier ingredients. In 2006, the U.S. Food and Drug Administration (FDA) issued what is called a "qualified health claim," which states that the unsaturated fat in canola oil may help reduce heart disease by lowering both LDL (bad) cholesterol and total cholesterol. This claim recommends that people include 1.5 tablespoons of canola oil in their daily food intake [Source: FDA].

Furthermore, some studies have shown that the alpha-linolenic acid (ALA) found in canola oil also has health benefits for the heart. It may protect against abnormal heartbeats and help with inflammation and blood clots.

Although canola oil may only be a handful of decades of old, it has carved out a significant place in American cuisine. McDonald's, America's most well-known and widespread fast food chain, switched to a canola oil blend in recent years, citing its lack of trans fat and other health benefits as a major cause for the change. Food Network celebrity and registered dietician Ellie Krieger, who focuses on healthy cooking, uses canola oil in many of her recipes and promotes its healthful qualities. The magazine "Cooking Light" also recommends its readers use canola oil and other healthy vegetable oils.

With canola oil's heart-healthy fat composition and neutral taste, which make it a versatile ingredient, it's easy to see why canola oil now has a place on the kitchen shelves of many American restaurants and households.

To learn more about the benefits of canola oil and related heart-healthy topics, see the links on the following page.

Not Just for Healthy Hearts

While canola oil has many uses in the kitchen, its benefits aren't limited to it. Canola seeds can also be used to produce biodiesel, an alternative fuel that can be used with many diesel engines. Biodiesel, a non-toxic, biodegradable made from renewable sources, can help reduce greenhouse gas emissions, making it much more environment-friendly than other kinds of fuel. Canola biodiesel is created by crushing canola seeds into oil and then removing the glycerin, leaving behind methyl esters (the chemical name for biodiesel). The leftover glycerin can then be used for other products, such as soaps or creams, and the crushed seeds can be converted to animal feed.