What is canola oil? 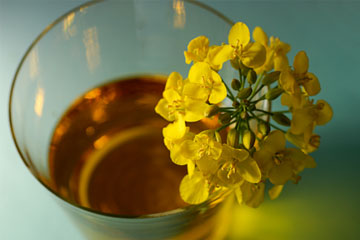 You'll find canola oil in most well-stocked kitchens. This oil is idea for cooking and baking.
©iStockphoto.com/adel66

A plant with the unfortunate name of "rape" produces a seed that, when crushed, makes an excellent vegetable oil. Unfortunately, the oil contains lots of something called erucic acid, which, in high doses, is toxic to humans. So back the late 1960s, Canadian agriculturalists used traditional breeding techniques to come up with a new version of the rape plant that had only trace amounts of that nasty acid. In honor of the country of its birth, they called this new edition "Canola" which is an acronym that stands for, "Canada oil, low acid."

Canola oil's ancestry has led to some confusion and controversy. Critics have gone so far as to claim that the oil is a toxic, genetically modified "frankenplant." In fact, the process that created canola is as old as human civilization. Plant breeding and hybridization are what brought us wheat, rice, corn and just about everything else that we eat. On the other hand, while canola is not, by definition, genetically modified, some 80 percent of today's canola crops are modified to make them more resistant to pesticides. According to the canola industry, by the time the oil has been extracted from the plant, none of the parts that were altered are left. But if you have concerns about genetic modification, make sure to buy organic canola oil. Organic certification ensures that the product has never been tinkered with in a lab.

Questions about gene tampering aside, canola oil has many desirable health benefits. Above all, it's incredibly low in saturated fats. In fact, at just 7 percent, the saturated fat content is the lowest of any vegetable oil available on the market. That's particularly impressive when you compare it with olive oil, which is 14 percent saturated fat, and peanut oil, which is 19 percent. Even better, it's correspondingly high in the "good" monounsaturated and polyunsaturated fats (those famous omegas!) as well as being a source of vitamin E.

While the canola industry likes to claim that eating canola oil will actually improve your health, it's unclear how this would work in practical terms. To get the amount of omega fatty acids and vitamin E that you need in your diet, you'd have to consume a lot of the stuff daily. What can be said with confidence is that drizzling some cold-pressed organic canola oil on your salad won't do you any harm. Notice the "cold-pressed" qualifier there: Old-fashioned heat-refined canola oil is pretty bland, but more recent cold-pressing methods have resulted in a nutty-tasting oil that makes a nice contribution to a vinaigrette. That said, don't toss your greens with old-school canola oil -- though it's great for stir-frying and baking because of its high smoke-point. In other words, you won't set off the smoke alarm every time you want to roast some rutabaga.

And speaking of smoke, if you use canola frequently, you may notice a familiar smell next time you pull up behind a tractor-trailer. That's because biodiesel made from canola oil is being used increasingly by the trucking industry. It appears that there's no end to canola's versatility.