Can I get cancer from eating tofu? 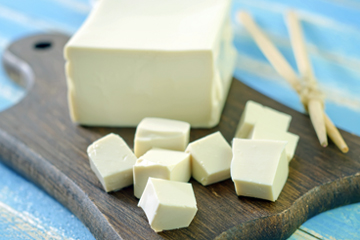 From tofu to edamame to tempeh, soy is everywhere. However, with all of its health-conscious street cred, there could be a risk of cancer in new reports.
tycoon751/Thinkstock

Tofu is a soy-based food, and there is growing concern over a possible link between soy and breast cancer. There has also been speculation that soy might help protect against other cancers, like uterine and prostate. This is because soy contains estrogenic chemicals known as isoflavones. And estrogen (or any substance that acts like it) can have both positive and negative effects on the human body.

On one hand, estrogen has a protective influence. It's likely one of the main reasons women have a much lower risk of heart disease before menopause. On the other, too much of it may assist in activating cancers (like breast cancer) that contain estrogen-receptor cells.

It's believed that soy isoflavones mimic these processes. However, there are other things we know about the chemicals that may contradict this theory. For instance, it has been discovered that isoflavones can also have some anti-estrogenic effects in the body. And, they tend to have antioxidant and anti-inflammatory capabilities as well.

Of course, these facts alone don't allow us to make the leap that consuming soy-based foods causes or prevents cancer. It's necessary for us to see what research says. And, so far, what we have is a mixed bag.

Research conducted on lab rats points to a possible increased risk. However, rats don't metabolize soy in the same ways humans do, so such studies can't be definitive on their own. Furthermore, studies evaluating different populations of women have come up short on any soy-breast cancer link. In addition, new research is also casting doubt on the idea that soy protects against other cancers.

So, can you get cancer from eating tofu? Right now, there's not a definitive answer to that question. However, current evidence suggests that most soy-based foods — like tofu, edamame, miso and tempeh — are safe. In fact, the only caution doctors typically give patients is to avoid soy-based supplements. That's because the soy in supplements is processed differently than it is in natural foods.

If you still have concerns about a potential link between soy and cancer — particularly if you're a breast cancer survivor — talk to your doctor or oncologist before making any dietary changes.

Soybeans: Natural Weight-Loss Foods
10 Ways to Reduce Your Risk of Breast Cancer
A Guide to Supplements for Seniors