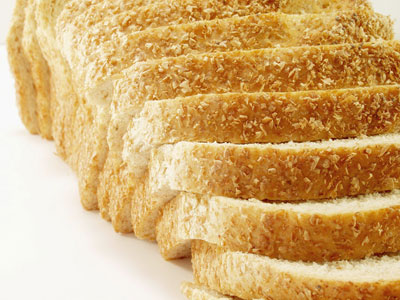 If you cut the bread crusts off your bread, you miss out on the nutrients.
Photodisc/Getty Images

It's not uncommon for picky eaters to trim the bread crust from a PB&J before eating it. But what these folks may not realize is that when they remove the crusts from sandwiches, they're also removing a powerhouse of antioxidants.

A study published in the American Chemical Society's Journal of Agricultural and Food Chemistry explains the various health benefits of eating bread crust. Bread crust not only contains powerful antioxidants that can combat cancer, it is also rich in dietary fiber, which can prevent colon cancer. Researchers at the German Research Center of Food Chemistry in Garching, Germany, experimented with an everyday sourdough bread mixture. Through analyzing the bread crust, bread crumbs from the paler inside of the bread and flour, researchers discovered that pronyl-lysine, an antixodant, was eight times more plentiful in the bread crust than in the other components of the bread. Pronyl-lysine was not at all present in the flour [source: Science Daily].

But what exactly does pronyl-lysine do? Researchers at the Institute of Human Nutrition and Food Science in Kiel, Germany, used human intestinal cells to study pronyl-lysine and found that it is effective at raising the levels of phase II enzymes -- enzymes that, according to previous studies, prevent cancer.

When you perform the seemingly simple act of popping some bread dough in the oven, you're actually beginning a complex set of chemical reactions that create powerful cancer-fighting molecules. What chemical reactions create the antioxidants that make bread crust so good for you?

10 'Healthy' Foods That Really Aren't
Are carrots really good for your eyesight?
Will an apple a day keep the doctor away?