How do they get the fat out of fat-free foods? 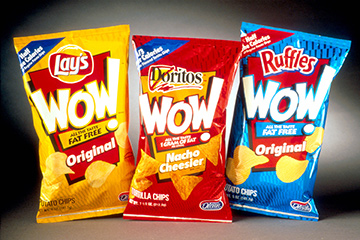 Wow, do you remember those olestra chips? You won't see them with the "WOW!" label anymore, but an April 2013 U.S. FDA report still cited olestra as a food additive that manufacturers could add directly to human food.
John Barr/Hulton Archive/Getty Images

Wouldn't it be great if we all ate exactly what we wanted and exercised only as much as we genuinely liked, yet still beamed with joy when we stepped on a scale? You know, like if there were some magical machine that just sucked all the fat out of all the foods we like, but still left them tasting delicious?

Alas, until that machine is invented (Nobel Prize 2050?!?), we are left to maintain our weight loss by exercising and actually paying attention to what we eat. For some, that means eating less. For others, maybe it means eating a lot of low-fat or fat-free foods. But given that there is no magical machine, how exactly do these fat-free cookies and cake lose their fat content?

First off, what is fat? We all know what it looks like in our food, but when you zoom in on the chemical structure, you'll find that all fats have in common long chains of carbon atoms, with some oxygen and hydrogen atoms thrown in to keep things interesting (see How Fats Work). The long carbon chains in fat molecules make it really hard for fats to dissolve in water, so generally to get them to dissolve, you need some sort of organic solvent, like chloroform or methylene chloride. You may first think that washing our fatty foods with one of these solvents would do the trick of removing the fat. It's a good thought. After all, that's often how they remove the caffeine from coffee and tea. But fat actually does a lot for our foods, and simply extracting or dissolving away the fat will leave us with foods that don't really resemble their original versions. Fat, of course, adds flavor, but also helps with texture, browning and even extending shelf life. So before we just get rid of the fat, we need to think about how to keep all that flavor and texture in the foods so they still taste good.

Peeking Behind the Fat-free Curtain

Lots of foods such as fruits, vegetables and whole grains, among others, are naturally fat-free (or only have tiny amounts). But these aren't the ones that we're concerned about. Let's talk instead about the foods that have a significant amount of fat to begin with that we want to alter.

Dairy products are a good place to start. When we first get milk, it has a good bit of fat in it. For many, that's unwanted fat. How do we get from whole milk down to skim? The process is pretty simple. Manufacturers put the whole milk into a centrifuge that separates out the heavy fat portion into cream and leaves behind skim milk. This skim milk can then be used to make other dairy products like yogurt and sour cream that are either low-fat or nonfat. However, many of these nonfat dairy products that are made simply from skim milk run into the problems we mentioned before: They don't taste good, their textures are funny, and they may not last as long in our refrigerators [source: Millstone]. Dairy products in this category, like fat-free cheese, need to be made the way many diet products are created: not by taking fat out, but by never putting the fat in to begin with.

Instead of making a food product – let's say a cookie – and sucking the fat out (leaving behind something that is no longer anything like a cookie), food scientists need to create that cookie from the start using nonfat-based additives instead of fat to compensate for all that fat brings to the cookie. Let's start with flavor. Fatty cookie ingredients like butter and eggs add a lot of flavor. To make up for the lack of flavor when those items aren't used, manufacturers add in extra spices and a lot more sugar to trick us into not noticing the missing fat. This is why low- and nonfat foods aren't always less caloric, as their "diet" name might imply; they often have a ton of extra sugar added [source: Millstone]. To deal with texture issues, manufacturers will add food binders like gums and starches and also water. However, as a result of adding water, these fat-free products aren't as shelf stable, so surfactants and emulsifiers like mono- and diglycerides (close cousins to fats, which are triglycerides) must also be added.

Long story short: Getting the fat out of fat-free foods, for the most part, actually means never putting the fat in there to begin with. What goes in the place of fat varies, but you'll often end up with a highly processed food product that may be quite different from its fatty counterpart.

Author's Note: How they get the fat out of fat-free foods?

As a chemist, I was sure that fat-free foods works similarly to caffeine-free coffee and tea. The product was washed with an organic solvent to dissolve the unwanted item (caffeine or fat), and then you were left with the final product. But as I stopped to think about it, fat adds a lot to food. It wouldn't be the same and couldn't be marketed as the same food, without the flavor and texture that fat adds. This was confirmed for me by a dietician whom I interviewed for this piece. So the title of this article is actually a bit misleading – they rarely "get the fat out" of fat-free foods, they just formulate them differently to begin with. And honestly, learning about it does not make these foods appealing to eat!