The Protein and Fat Connection 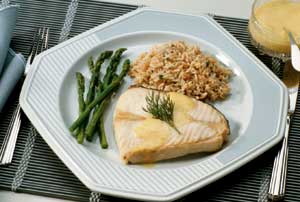 ©2006 Publications International, Ltd. The key to picking the right proteins is finding sources that are low in fat like fish.

Protein is an important element of any diet, but it's importance is often overstated. In fact, protein is, as a nutritional source, somewhat overrated. Although getting enough may be the difficulty in some areas of the world, it's rarely a problem in the United States. In fact, too much protein is our curse.

You need about 50 to 60 grams of protein per day, and that's not as much as it sounds. Consider this: A quarter pound of meat, cooked, provides about 20 grams of protein, and a glass of milk adds another 8 grams. Every slice of bread, or equivalent serving of starch, adds another 2 grams each. So you see how easy it is to get enough protein. Anyone who eats meat easily gets more than enough.

Too Much Of A Good Thing

Many people make the mistake of thinking you can never get too much protein. They associate protein with growth and assume more is better. They couldn't be more wrong. Once your body gets the amount of protein it needs, it converts the rest to energy, and if you already have enough energy, it is converted to fat. Obviously, this is not what you have in mind when you order the cottage cheese and hamburger diet plate!

Too much protein can also rob the body of its bone-strengthening calcium stores and has been implicated in osteoporosis. Although most people's kidneys can handle the job, eating excessive amounts of protein does put a strain on your kidneys, whose job it is to filter out the by-products of protein digestion.

Just as with sugar, protein's biggest problem is the company it keeps. Protein and fat just seem to go hand-in-hand. Think about it. High-protein foods are very frequently high-fat foods: meat, milk, and cheeses. Fortunately, there are low-fat choices, including skim milk, reduced-fat cheeses, and lean meats.

If you don't choose low-fat options and consistently eat foods with too much fat, you'll gain weight. That's because fat provides nine calories per gram -- more than twice the four calories per gram provided by either carbohydrate or protein. But fat is also essential to life. It's a source of linoleic and linolenic acids, which are essential fatty acids, and it's needed for brain functioning and absorbing fat-soluble nutrients.

The Road To Heart Disease

First and foremost among the health problems associated with dietary fat is heart disease -- the leading killer of both men and women. The fat content of your diet is only one risk factor -- family history, smoking, and exercise are others -- but dietary fat plays a crucial role. And unlike family history, it's one you can control.

The relationship between dietary fat and heart disease risk is somewhat complicated. If you want to understand how fat can increase your risk, you've got to look at the sometimes confusing topic of cholesterol.

Cholesterol is not a fat, although it is a fatlike, waxy substance (lipid). It is only found in foods that come from animals. Like fat, it leads a schizophrenic life: vilified but essential to life. Cholesterol is needed to make vitamin D and the sex hormones, and it is a key ingredient in the protective covering around nerves.

The danger comes from the cholesterol circulating in your bloodstream. There, it can be attracted to any vulnerable spots along the walls of the arteries, where blood clots form and calcium also gathers. This plaque, as the deposit is called, continues to accumulate, narrowing arteries until blood can no longer flow through.

Cholesterol gets ferried around the bloodstream by substances called lipoproteins. There are different kinds -- some better for you than others:

Government groups and private health organizations currently recommend keeping total fat in your diet between 20 and 35 percent of calories. Often lost in the shuffle, though, is the message to keep saturated fat to less than 10 percent of calories. To cut down on saturated fats, drink skim instead of whole milk, buy very lean meats, trim any visible fat, and limit portion sizes.Most important, move away from meat as the focal point of your diet. Concentrate on plant foods; their fat is mostly unsaturated, except for coconut oil, palm oil, and palm kernel oil, which are highly saturated.Here's a clue when you're standing, eyes glazed, in front of the supermarket dairy case: the more liquid a fat is at room temperature, the more unsaturated it is. That's why oils are your best bet, followed by squeeze or tub margarines, rather than stick margarines, butter, or lard.And eliminate trans fat from your diet. Check the trans fat content listed on the ingredient label, and avoid foods that contain it. Also, if "hydrogenated" or "partially hydrogenated" oils are listed, then trans fatty acids are present.Many nutritionists, however, believe it truly doesn't matter whether "polys" or "monos" predominate in your diet. What's important is keeping total fat to less than 35 percent of total calories and saturated and trans fats low. A high intake of fat (greater than 35 percent of calories) is likely to increase saturated and trans fats in your diet and makes it harder to avoid excess calories. For the fat that you do use, it may be best to choose olive oil or canola oil, both of which are high in monounsaturated fat and low in saturated fat. There may be one bright spot in the relationship between fat and heart disease: omega-3 fatty acids.  Omega-3 fatty acids may sound like something out of Star Trek, but they're really just a certain kind of polyunsaturated fat found in fish oils.Fish has a reputation as brain food, but its track record is as heart food. Research has pinpointed three ways omega-3s may help prevent heart disease -- by reducing blood pressure, lowering blood triglycerides (another type of fat), and lengthening the time it takes blood to clot. (This last benefit can also be a detriment. Eskimos, who have diets extremely high in omega-3s and have low rates of heart disease, suffer more bleeding-type strokes.)

Fish oil supplements are a source of omega-3 fatty acids, but your diet is a more logical place to start fishing for benefits. Fish certainly fits into a healthy diet. Even fatty fish, those that are highest in omega-3s, have little fat compared to beef, especially in the saturated fat department. Consult your doctor about the benefits and risks of fish oil supplements.

Plant foods that contain alpha-linolenic acid are considered sources of omega-3 fatty acids because the body can convert them into that form. Examples of these foods are dry beans, canola oil, flax seed, seaweed, tofu, walnuts, and wheat germ.

The same cholesterol that clogs up coronary arteries can also clog up the arteries to your brain. The result, just as devastating, is a stroke instead of a heart attack. The fact that strokes add up to be the third leading cause of death doesn't tell the whole story; they're also the leading cause of serious disabilities.

Blood pressure is an important risk factor for strokes, but so is a high blood cholesterol level. Research points to a component of LDL cholesterol called lipoprotein(a), which can increase your risk of stroke, as well as a heart attack.

The nation's number two killer -- cancer -- also has ties to diets high in fat. Diets high in fat and calories lead to overweight and obesity, which increase the risk for certain cancers.  The link is strongest for colon cancer, breast cancer (in postmenopausal women), and cancers of the endometrium (uterine lining), pancreas, esophagus, gallbladder, and kidney.

The type of fat may make a difference in cancer susceptibility. Some research fingers saturated fat, but a sizable number of papers cite polyunsaturated fat as a culprit. This certainly makes a diet that emphasizes monounsaturated fats seem all the more friendly, but it also argues for an all-around low-fat diet.

It's also possible that the increased risk is the result of the combination of eating high-fat, high-calorie foods and not enough fruits and vegetables. Or maybe having too much body fat adds kindling to the fire of other carcinogens -- like tobacco.

Fat contains more than twice the calories that carbohydrate or protein does, so it can quickly add to your total calorie intake. What's more, it seems that your body would rather convert dietary fat directly into body fat than burn it for energy, meaning that you might as well apply it directly to your hips or spare tire. Over time, eating too much fat leads directly to obesity.

However, with all this talk of which kind of fat is worse for your health, it's important to remember that every one of the different kinds -- saturated, trans, polyunsaturated, monounsaturated -- packs a whopping nine calories per gram.

Yet, the fat content of the diet doesn't seem to be the smoking gun in this case, even though the gallbladder's function is to release bile to help digest the fat you eat. The culprit is simply eating too much, which fat is a party to. However, a diet too low in fat is not good either, because it can cause the gallbladder to stagnate, and the inactivity may allow stones to form.

So the old admonition to follow a low-fat diet to avoid overstimulating the gallbladder is no longer sound advice. If greasy foods bother you, then avoid the fried route. Otherwise, the best advice is to lose weight and eat more fiber, a measure that helps for no obvious reason.

The image of football players eating steak for breakfast and Sylvester Stallone drinking raw eggs in Rocky has perpetuated a myth that athletes perform better the more protein they get.

Not true. Although it may seem logical, protein does not help build muscles; exercise does. Extensive exercise requires extra carbohydrates, not protein.

Although elite athletes may require more protein than weekend warriors, it is easily obtained from the extra food they eat to maintain their energy level. Protein powders and supplements are a waste of money, and single amino acids are potentially dangerous.