Are humans built to drink milk as adults? 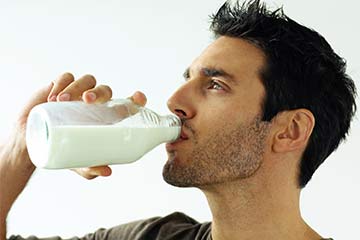 When people can't digest milk, we call them lactose intolerant. This seems to signify that it's an unusual condition — that most people are just fine with milk, cheese and ice cream, and that lactose intolerance is something that needs to be fixed or helped. But it turns out that those poor souls who get gassy, crampy and otherwise digestively miserable after eating dairy products are actually in the majority worldwide. It's the people who can handle milk who are the weird ones.

Lactose is the main sugar in all mammal milk, and everyone is born with the gene that codes for lactase, the enzyme that processes lactose. When we're babies, in other words, we all have the ability to digest milk. The small intestine produces lactase — it breaks down lactose into glucose and galactose, which can then be easily absorbed into the bloodstream. But for reasons unknown, the lactase gene tends to shut off about the time we're weaned from breast milk. Most people don't create any lactase (or very little of it) by the time they're 5 years old or so. In the absence of lactase, undigested lactose just sits in the colon and ferments, causing all kinds of uncomfortable side effects.

Some people, however, carry a genetic mutation that allows the lactase gene to keep working. Sometimes it continues for just a few more years, sometimes for a lifetime. Ninety percent of Americans have a functional lactase gene, so in the U.S. it is unusual to be lactose-intolerant [source: Understanding Evolution]. But worldwide, more than 60 percent of people lose the ability to process lactose [source: Weise]. Because lactose intolerance is the more common condition around the globe, scientists and researchers in the field actually use the term lactase persistence for people who can digest milk.

Certain populations are more prone to lactase persistence than others. In the U.S., people of Caucasian descent are much more likely to be able to digest dairy — and African-Americans, Hispanics and Native Americans are not. Northern Europeans, especially Scandinavians, tend to hang on to the lactase gene. Spaniards and the French are about half and half. But a full 99 percent of Asians are lactose intolerant (hence the absence of dairy in Asian food) [source: UE].

Scientists aren't sure why some people lose the lactase gene, but they have figured out that the genetic mutation appeared about 7,500 years ago among dairy-farming populations in Central Europe. The mutation also popped up in Eastern Africa around the same time, also in dairy producers. The theory is that the mutation was random (as all mutations are), but it became genetically advantageous in these dairy-eating populations and thus spread rapidly. To this day, there are still high rates of lactase persistence in these areas.

Lactase persistence might not be a necessity for survival in the modern world, but it does make life more pleasurable for many people. So if you can enjoy ice cream sundaes, milkshakes and pizza with no problem, remember that you're one of the lucky ones.

The Case for and Against Taking Fish Oil Pills
How much dirt do I eat in a year?
How Folate Works