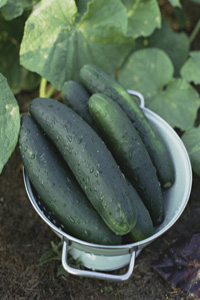 One of the world's oldest cultivated crops originated in India and was grown throughout Western Asia as far back as 2,000 to 1,000 B.C. [source: CHOW]. It might surprise you to learn that cucumbers are technically fruits -- they contain the seeds of the plant -- and belong to the same plant family as pumpkins, zucchini and watermelon [source: CDC]. Since cucumbers are more than 90 percent water, they contain no fat, almost no carbohydrates and very few calories, making them a popular diet-friendly snack.

All that water also gives cucumbers their unique refreshing quality, especially on a hot summer day. The phrase "cool as a cucumber" is actually a scientific fact: The inside temperature of a cucumber can be up to 20 degrees cooler than the outside air [source: CDC].

There are several common varieties of slicing cucumbers. American slicing cucumbers are typically 8 inches long (20 centimeters) and slightly bulged in the middle. These cucumbers have more and larger seeds than other varieties, but are readily available in the summer months. American cucumbers are often waxed to improve their moisture retention and shelf life. Don't worry, though: The wax is totally edible.

English cucumbers, also known as "greenhouse" or "seedless" varieties, are much longer and thinner than American cucumbers. Their thin skin has a slight ridged quality, and their seeds are very small and delicate. They are sold in shrink-wrapped plastic because they aren't waxed.

The most popular varieties of pickling cucumbers are gherkins -- tiny West Indian cucumbers -- and 4-inch (10-centimeter) American pickling cucumbers. Most pickling cucumbers have thin, bumpy skins that have small spikes when freshly picked. They also have large seeds. During the pickling process, the natural water content of the pickle is replaced with a briny solution of salt, peppercorns, garlic, dill and other flavors.

When shopping for cucumbers, look for narrow fruit with firm, rounded ends [source: Iowa State University Extension]. Large bulges mean lots of seeds that will need to be scooped out, and wrinkled, sagging ends mean it's been sitting out for too long.

Since cucumbers are mostly water, each half-cup serving only contains 10 calories -- and that's including the peel. But all that water doesn't leave a lot of room for vitamins and minerals, either. A serving of cucumber contains 2 percent of the U.S. Department of Agriculture's (USDA) recommended daily allowance of vitamin A and 2 percent of your daily vitamin C intake [source: CDC]. The rest of the cucumber's vitamin and mineral values don't even make the chart.

The skin, seeds and membranes of the cucumber contain some fiber. It's estimated that a single 8-inch cucumber (with the peel) supplies 12 percent of your daily fiber intake [source: Iowa State University Extension]. The cucumber's 2 grams of total carbohydrate include a single gram of sugars.