What are the top supplements for Olympic weightlifters (and can they help me)? 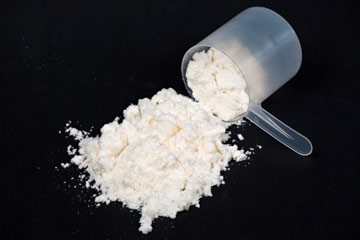 A shake is a great way to increase your protein intake, especially when you're training.
iStockphoto/Thinkstock

If you ask an Olympic weightlifter what he or she benches, you're going to get a sigh in response.

To lift a terrifically heavy weight from the ground and hold it over your head in one second, your body has to be in top shape. And to get to that peak performance level, you have to treat your body like the highly efficient machine it is.

You have to give it the right fuel.

Unlike in 1896, when the first modern Olympics took place, in 2012 there a wide variety of supplements an athlete has access to that all claim to give a competitive edge. On one end of the spectrum, we have multivitamins and whey protein. On the other, anabolic steroids and hGH (human growth hormone).

The latter are prohibited by the World Anti-Doping Agency (WADA), whose guidelines the Olympics committees follow. You can access the full list of prohibited substances on the group's Web site. Growth factors, fat burners, hormone modulators, masking agents -- they're all no-nos. The National Collegiate Athletic Association (NCAA) uses similar guidelines.

So, assuming that an athlete follows the rules and stays away from the juice, what are the top supplements for Olympic weightlifters? Let's find out.

The top supplement for Olympic weightlifters is ... (drumroll, please): no supplement at all. It's about eating right. As Alford said, "Supplements are just that: supplements. They are not substitutes. Nothing can replace the goodness of whole foods."

Try first to reach your goal nutritionally. Get lots of protein to build muscle. Eat several small meals throughout the day instead of three big ones. Be careful with your carbs. Manage your meals around your workout schedule.

The purpose of a supplement is to make up for your deficits. If, for example, you need a ton of protein but just can't choke down the requisite amount of roasted chicken, mixing some whey protein into a shake is another way to get those nutrients.

One of the problems with supplements is that they're not regulated by the FDA in the same way that drugs are. The FDA will yank supplements off the market that prove to be harmful, like those containing ephedra, but that depends on consumers and manufacturers reporting adverse side effects, which doesn't always happen.

If you choose to take a supplement, be smart:

The most common supplements for lifters are probably multivitamins, creatine, essential fatty acids like fish oil, and protein powders. There is at least some biological evidence for all of these that supports their use -- as long as you're not experiencing adverse side effects.

And remember what your grandmother always said -- if it sounds too good to be true, it is.

Alford has some additional advice for those shopping the supplement aisle. "If a word is more than six syllables, stay away from it. If it contains a number in the ingredient (i.e., GHRP-6), stay away from it -- it's probably an anabolic steroid."