by John Perritano Jun 6, 2018
British journalist Sir Bernard Ingham could probably use a "guybrown" trim. A lot of men have eyebrows and other body hair that grows unwieldy in their older age. Oli Scarff/Getty Images

I've been shaving my head for the past 15 years or so. I started losing my hair just after college. Tired of cleaning gunky shower drains littered with a forest of follicles, I found it easier to take razor to scalp. Now, as I play on the back nine of life, hair has once again become a central issue. It still doesn't grow on my head — oh no — the gods have seen to that. Instead, it grows like dandelions — in the most unwanted places.

If you're a male baby boomer, or older, then you know what I'm talking about. Hair, long beautiful hair, sprouts like a farmer's well-fertilized field but not where you want it to. Instead it grows out of our ears, out our noses, our backs, our chests. Yuck! Double yuck!

Unwanted hair! It's a fact of life for older men, a gross embarrassment that we must endure along with creaky joints, constant urination and body parts that seem to work (or not) on their own. Yet, there's simply no good explanation as to why "...shining, gleaming, streaming, flaxen, waxen give-me-it-down-to-there hair" grows where we don't want it.

"I wish there was a good answer," Dr. Jeffrey Benabio, a member of the American Academy of Dermatology told The New York Times a few years ago.

'nough said! Interestingly, there is a dearth of scientific evidence on why older men grow hair in the most conspicuous places. There are dozens — hundreds even — of scholarly articles on what to do about unwanted hair, but relatively none on what causes it.

Scientific American posited a theory a few years ago. The magazine said when boys go through puberty their testosterone levels spike (tell me about it). As a result, the small hairs on their faces, underarms, chest and pubic areas turn into large hairs and remain in anagen, the active phase of hair growth, for an extended period. When boys turn into men and get older, however, testosterone causes the hair follicles in their ears and nose to grow as thick as tree trunks.

That same sensitivity to testosterone works in reverse for males with specific genes tied to baldness. Yes, our ear and nose hair will get longer, but the hairs on the top of our heads become smaller and spend less time in anagen. What's the outcome? You guessed it — a naked pate. Thank you, Mother Nature.

In 2017, researchers at the University of California discovered that individual hairs "talk" to one another. They chat up a storm to coordinate hair growth across the entire body. Regulated by a single molecular mechanism that ensures that no bald patches form, animals use the signaling pathway for survival.

Here's how it works: Skin is home to hundreds of thousands of hair follicles. Each goes through different stages. Some follicles grow hair for a long time before losing it. When that happens, the follicle takes its time before it sprouts another hair. To make sure the hair density on your body is just right, the follicles coordinate with each other using chemical signals. If they didn't talk, bald patches would form across your entire body. Some signals stimulate hair growth, others prevent it.

"The balance between these two signals affects the pattern of hair growth," the authors of the study write in the online journal eLIFE. "For example, higher levels of activators [signals that stimulate hair growth] allow fur to grow thickly on the belly of [a] mouse, likely to protect against heat loss and injuries from the ground. By contrast, higher levels of inhibitors [signals that prevent hair growth] make the hairs on the ear sparse, which may prevent them from interfering with hearing."

"In analogy with languages spoken in two neighboring countries, it was unclear how the back skin 'talks' with the belly skin to coordinate the tasks of growing hairs," Maksim Plikus, an assistant professor of development and cell biology at the University of California, Irvine said in a statement. "We showed that although different signaling 'dialects' may exist between belly and back skin, for instance, all hairs can understand one another through the use of similar 'words' and 'sentences.'"

While all of this is very interesting, what does it tell us about why ear and nose hair gets so out of control? The researchers say a communication breakdown between the follicles may lead to hair growth irregularities, including male pattern baldness.

"Just like scalp skin can show hair growth deficiency, skin in other body sites – such as the face, arms and legs – can often show excessive hair growth that can be cosmetically undesirable," Plikus said. "Our findings suggest that increased signaling crosstalk among hair follicles could be one major reason for this."

Learning to activate and control communication between these follicles could provide a way to treat male pattern baldness, the study said.

So there you have it. In summation there are really no good answers as to why hair grows in the most awkward of places. The best solution I could find comes not from a scientist, but an American poet, X.J. Kennedy: "For when time takes you out for a spin in his car/You'll be hard-pressed to stop him from going too far/And be left by the roadside, for all your good deeds,/Two toadstools for tits and a face full of weeds."

Or too much ear and nose hair!

Now That's Interesting
Men aren't the only people who have to deal with unwanted hair growth. Some older women have a condition call hirsutism, in which dark, coarse hair appears on their face, chest and back, all places men typically have hair. It's caused by an excessive amount of testosterone, but can also be genetic.

This Podcast Needs Your Help to Answer Life's Most Challenging Questions 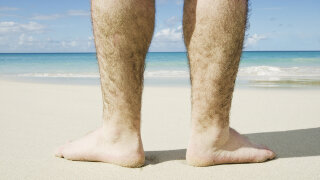 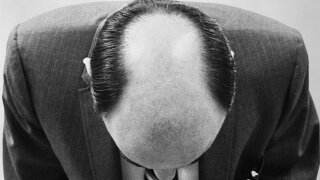 Why Aren’t There More Patterns in Male Pattern Baldness? 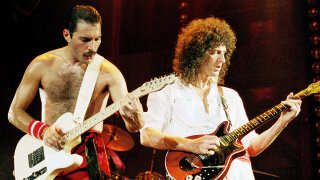 Drop the Razors, Guys! Chest Hair Is Back