Should men shower before a workout? 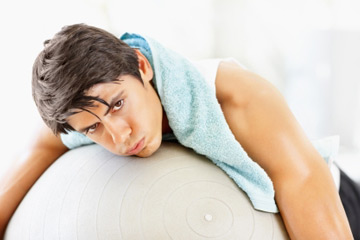 Increasing your core temperature also helps to increase your basal metabolic rate (BMR). Your BMR is how many calories your body needs to sustain itself while you're doing nothing at all, and the higher it is, the more calories you burn. Increase your core body temperature by 1 degree F (0.5 degree C) and you increase your basal metabolic rate by roughly 7 percent [source: ShapeFit]. Additionally, warm-up routines are important because your body is more flexible when you're warm. And being more flexible minimizes your risk of injuries such as strained muscles or torn ligaments. Warmed muscles also contract and relax faster to give you a more powerful performance and reduce how quickly you tire out.

Warm-ups should last about five to 10 minutes and should include stretching, walking, jogging or jumping rope, calisthenics -- and a shower? Maybe.

A hot shower at the beginning of your warm-up routine may help to raise your body temperature, and that may help you stretch and lengthen your muscles as you warm up for an intense workout. While a warm shower may help loosen you up, a cold shower before a workout generally is not on everyone's to-do list. Here's the scoop, though: The hotter your temperature is when you begin working out, the faster you'll burn out. Summer temperatures or intense workouts in hot environments increase your chance for heat stroke. This is where the idea of pre-cooling becomes important.

Pre-cooling Before a Workout

You may be familiar with the idea of pre-cooling from the Olympics, having seen athletes wear ice vests for the first time during the 1996 Atlanta games. A cold shower works in a similar way.

Multiple studies indicate that a cold shower, bath or even ice pack applied to strategic places (such as the back of your neck) before a workout may help not only cool your skin, but also reduce your core body temperature. Why would you want to do either of those things, when the idea behind a warm-up is just that -- to warm up? Cooling your muscles before a workout reduces their power, but if you're exercising in hot, humid temperatures, pre-cooling may be beneficial. A study published in the European Journal of Applied Physiology and Occupational Physiology found that when muscles are cold, in this instance after being submerged in 53 degree F (12 degree C) water, the men in the experiment initially had a lower heart rate while exercising when compared to those whose muscles hadn't been treated to the cold-water bath.

Submerging yourself in a tub of cool water before intense exercise in hot summer temperatures can help reduce the risk of your body's core temperature rising too quickly. The idea behind pre-cooling is to reduce stress on the body while maximizing its endurance. In fact, researchers at the Australian Institute of Sport have found that reducing your core body temperature can help to increase your exercise performance by as much as 7 percent [source: Brearley]. A lower core temperature changes how the body deals with its heat storage reserves in hot weather, allowing for a greater possible increase in muscle temperature and heart rate before the body begins to overheat or become impaired. If you monitor your performance while you exercise, such as with a heart-rate monitor, this means you have just given yourself more time to work out before your core temperature hits critical levels.

Remember, a pre-cooling shower isn't for everyone. Unless you're an endurance addict, it may be best to reserve the cold showers for your cool-downs. To learn more, check out the next page.

Warm-Up Exercises
Total Body Workout Routine
Should a man take a cold shower after a workout?

Why do men smell different from women?
Why do I sweat when I eat?
Hyponatremia Explained