What was the world's first underarm deodorant? 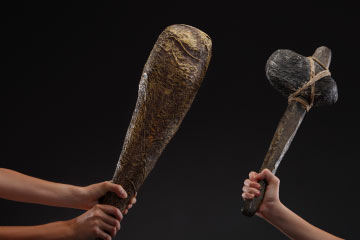 Most of us put it on every day (and wish everybody else did, too). Few of us give the product much thought unless we realize mid-first date that we've forgotten to put it on. We're talking about deodorant, a hygiene must-have that's been popular throughout the ages.

Egyptians are often credited with developing the first deodorant, applying sweet-smelling scents to cover up what had to have been a pretty ripe smell up and down the Nile. They brought an early dose of variety to the world of deodorant, using a host of spices, such as citrus and cinnamon, to stave off that late-day funk.

Alcohol-based, perfumed deodorants were developed in the Middle East and made their way to Europe in the 13th century, as Crusaders returned from faraway lands with the products they discovered among the people they hoped to conquer.

But certain cultures were more keen to mass-produce, market and sell consumer hygiene products -- that opportunity wouldn't pass by the Americans without someone reaching out and taking it.

The first mass-produced, commercially sold deodorant was Mum, a zinc compound that hit the markets in 1888. It was a cream applied to one's underarms by hand. The first deodorant aerosol could be found on shelves in the 1950s (back when we still thought aerosol was a great thing). And, since then, we've seen the roll-on deodorant, which is an improvement over slathering it on with your fingers or eradicating the ozone layer.

Our ability to walk into a room without others recoiling in olfactory horror was enabled by a civilization -- the first, actually -- that knew body odor was anything but civilized.