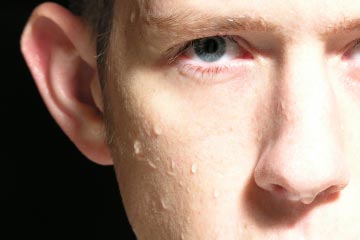 Your first clue that you might have hyperhidrosis is probably dripping down your face, back or arms. That's because hyperhidrosis, also known as diaphoresis, is the term for excessive sweating. And we're not just talking about a little extra "glimmer" here. This is the kind of profuse moisture release one might expect after a spin class or impromptu public speech. While breaking into beads of moisture would be understandable for either of these events, hyperhidrosis doesn't need this kind of trigger. For those with hyperhidrosis, excessive sweating happens nearly all the time -- even if they are relaxing in cool temperatures. It can be so severe, in fact, that it may require a frequent change of clothes just to get through the day. But it's not just a cosmetic or hygiene issue; untreated, hyperhidrosis can have very real social or occupational consequences, ranging from slippery handshakes to hard-to-grip steering wheels.

Hyperhidrosis equally affects both genders and can begin at any age, but it's most commonly noticed about the time puberty hits. Race doesn't seem to be a factor either, with the exception of sweaty palms. Palmoplantar hyperhidrosis is reported with 20 times more frequency among the Japanese than other ethnic groups [source: Schwartz]. Overall, 1 in 3 people worldwide are thought to have hyperhidrosis.

There are two types of hyperhidrosis. Primary focal hyperhidrosis refers to overactive sweat glands that affect certain areas of the body, such as the hands, feet, face or underarms. This form of hyperhidrosis can't be prevented and isn't contagious because it was probably inherited (although the condition may skip a generation). Secondary generalized hyperhidrosis is total body sweating prompted by secondary medical conditions or medications.

Treating either form of hyperhidrosis usually entails more than a simple over-the-counter antiperspirant, but that's still a good place to start. When applied to the top of the skin, the active ingredients in antiperspirants, such as aluminum chloride hexahydrate, cause cells within sweat ducts to swell and block fluid from flowing out. Although typically slathered under the arms, antiperspirant can be used on the feet, hands or even the face -- anywhere sweat occurs in good measure. However, not just any product will do. Deodorants and antiperspirant aren't interchangeable; deodorants prevent odor-causing bacteria, not sweat.

Sometimes stronger treatments are the next best option, such as placing one's hands in tubs of water while receiving low-level electric shocks. Arcane as it sounds, iontophoresis helps reduce sweat production, although no one's really sure why. Botox injections on the armpits, hands, feet or face can reduce sweating, but only right where they're administered -- and treatments can be pricey and short-lived. Oral medications, such as beta-blockers thought to prevent sweat gland stimulation, are sometimes prescribed but can cause long-term side-effects. As a last resort, surgery or liposuction can remove sweat glands and interrupt nerve paths, but with mixed results. Turns out the body's a good compensator, making up for its newly lacking glands by sweating more in other places, such as the chest or buttocks.

To learn more about excessive sweating, check out How Hyperhidrosis Works.

Men's Nutrition Questions Answered
What does a change in body odor mean?
What is diaphoresis?