Alpha Lipoic Acid: What You Need to Know 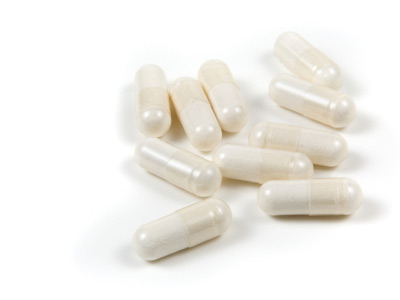 Our bodies produce alpha lipoic acid and we can absorb it from a variety of foods including red meat and spinach.­
iStockphoto/Brian McEntire

­Free radicals. It sounds like something they give away at protest rallies. But in your body, they are cells with unpaired electrons that attack other molecules to achieve stability, damaging the DNA of those molecules and spreading disease.

Enter the antioxidant -- compounds the body uses as its defense system to fight free radicals and keep them from setting off chain reactions of cell mutation that can lead to a host of chronic diseases like cancer, heart disease, Alzheimer's and Parkinson's [source: Davis].

One antioxidant getting a lot of attention on the free radical fighting scene is Alpha Lipoic Acid (ALA). Also known as thioctic acid, ALA is naturally produced in the body, as well as absorbed from certain foods we eat, such as red meat, spinach, potatoes, broccoli, yams, carrots, beets and yeast [source: American Cancer Society].

But because they are not drugs, ALA supplements are not subject to regulation by the Food and Drug Administration. Respected medical journals haven't jumped on the antioxidant bandwagon and more studies are needed to test its effectiveness in humans.

­In the following sections, you'll learn about some of the research surrounding ALA and how this antioxidant works in the body, along with its benefits, side effects, and impact on weight loss and peripheral neuropathy -- numbness in the hands and feet.

Alpha Lipoic Acid at Work in Your Body

­AL­A is a fatty acid both produced by the body and absorbed from the foods you eat. When it binds to certain proteins, ALA plays an important role in our metabolism -- namely the Krebs cycle, the body's main process for converting carbohydrates into energy. And unlike other antioxidants, ALA is both water and fat soluble, enabling it to work throughout the body. That's why it's found in varying concentrations in all your muscles and internal organs [source: Larsen].

Your body typically produces enough ALA for its role in creating energy. But when there's an excess in your system, ALA does not bind to protein and acts as an antioxidant. When in this "free" state, ALA deactivates a wide variety of free radicals, such as heavy metals, circulating through your body. It may also help regenerate other antioxidants like Vitamin C and Vitamin E to fight more free radicals [source: Berkeley Wellness Letter].

Because we produce less ALA as we age, some researchers believe that taking a supplement may help slow the aging process. ALA, combined with acetyl-L-carnitine, has been touted as an anti-aging and vitality supplement [source: National Toxicology Program]. To learn more about the benefits of Alpha Lipoic Acid, read on.

Available in doses between 30 and 100 mg, you can order ALA tablets or capsules online or buy them at health food stores. It is recommended that ALA supplements be taken on an empty stomach. However, no one has established a safe and effective dosage, and the National Institutes of Health's Office of Dietary Supplements does not have a fact sheet on ALA., so you should consult your doctor before adding it to your daily regimen [source: Office of Dietary Supplements, Higdon].

­Many of the health benefits attributed to ALA supplements are based on lab testing on animals, primarily rats. Whether humans would experience similar results from ALA's antioxidant powers has not been studied enough to produce definite answers.

Early animal studies suggest that ALA may help in treating Alzheimer's and other diseases that affect the nervous system [source: Larsen]. Additional studies have shown that a combination of antioxidants (including ALA) has helped cancer patients regain their appetite and weight. While early lab experiments suggest that ALA might cause cancer cells to self-destruct, it is unknown if the same effect can be replicated in animals or humans. Researchers are studying ALA as a possible therapy for reducing the side effects of radiation and chemotherapy. Research is also underway to determine if ALA can help prevent nerve damage that may result from some chemotherapy drugs [source: American Cancer Society].

Another potential benefit of ALA is the treatment of diabetes. Although some studies have found that ALA has a positive effect on insulin sensitivity, glucose metabolism and diabetic neuropathy, more research is needed to determine whether ALA supplements provide substantial benefits for type 2 diabetes and its complications [source: National Center for Complimentary and Alternative Medicine].

ALA supplements may also decrease the buildup of plaque within the arteries. One study found that ALA reduced heart damage caused by chemotherapy drugs. Another found it beneficial in treating cardiovascular autonomic neuropathy -- a condition characterized by an irregular heartbeat that's common in diabetics [source: Higdon, American Cancer Society].

There are also reports that ALA may have health benefits in relation to cataracts, seizures, kidney damage and liver disease, but additional studies are necessary before any definite conclusion is drawn. In addition, ALA, like just about any other medication or supplement, is not without its side effects. Read on to find out more about ALA's side effects.

Scientists first discovered the ALA compound in bacteria back in 1937. At one time scientists believed ALA was a vitamin -- substances the body needs, but can't produce on its own. But in 1998, it was identified as an antioxidant crucial to energy production in the body [source: American Cancer Society].

­Research has shown that patients can take 300 to 600 milligrams of ALA a day with relatively few side effects, such as skin rashes, stomachaches, nausea, diarrhea and vomiting. However, the jury is still out on the long-term effects of taking ALA supplements. Anyone with pre-existing medical conditions should exercise caution. Children are not advised to take ALA. Pregnant and nursing women should consult their doctors before taking it.

Diabetics who take ALA must monitor their blood sugar levels carefully, because the supplements may lower blood glucose levels [source: National Center for Complimentary and Alternative Medicine].

ALA may also lower levels of thyroid hormone and thyroid-regulating medications (Levothyroxine). Hormone levels should be monitored closely for those taking thyroid hormones and ALA supplements [source: University of Maryland Medical Center]. There is also concern that ALA might interfere with radiation therapy or chemotherapy by making the treatments less effective [source: American Cancer Society].

Unlike prescription drugs, supplements like ALA capsules don't have to be approved by the FDA before they are released on the market. Nor are they tested for their adverse affects when taken with other medication. In 2005, supplements accounted for almost 24,000 calls to U.S. poison control centers [source: American Cancer Society]. That's why it's always best to check with your doctor before taking any herbal remedy.

Read on to learn how ALA may help you lose weight.

It Takes a Village

It takes a variety of antioxidants to protect a cell from free radicals. ALA may be able to convert other antioxidants to their active forms, namely vitamins C and E, Coenzyme Q10 and glutathione [source: Treadwell].

­If you have a rat with a weight problem, ALA supplements might help get rid of some of that cheese you feed him. But if you're a human looking to slim down for bikini season, you should probably stick with your diet and exercise plan. At this point, ALA hasn't proven its effects on the human body.

Recent studies have shown ALAs can regulate metabolism and inhibit the metabolism of fat in the liver. Unfortunately, those findings are based on lab experiments involving cultured rat liver cells and skeletal muscles -- not bathing beauties [source: Treadwell]. So, there's no indication the same results would occur in humans.

One study conducted at the University of Ulsan College of Medicine in Seoul, Korea, found that ALA decreases the activity of fuel sensors in rats, causing the rodents to eat less and expend more energy, resulting in "profound" weight loss [source: National Center for Biotechnology Information]. But until the same effect is observed in humans, there's probably no point in popping an ALA supplement to achieve weight loss.

The bottom line is further research is necessary concerning ALA's effects on humans in regard to its use for weight loss. In general, it's always best to use extreme caution when taking supplements. And if you do decide to incorporate ALA or any other supplement into your diet, be sure to share that information with your physician.

Next up, learn about ALA's effect on numbness and tingling, or peripheral neuropathy.

R and S forms of ALA

When ALA is chemically synthesized, the compound has two isomers, R and S. ALA synthesized by the body has only the R form. Most, if not all, of the studies performed in humans have used a racemic 50/50 mixture of the R and S isomers. It is not clear yet whether R-ALA supplements are better than racemic ALA supplements [sources: Treadwell, Higdon].

­Peripheral neuropathy is a condition characterized by pain and numbness in the hands and feet that occurs in patients with diabetes, nerve pressure (from abnormal bone growth or a tumor), vitamin deficiency, kidney or liver disease and alcoholism. Cancer treatment chemicals can also cause it and HIV patients are prone to it [source: Mayo Clinic].

More than 20 percent of diabetic patients develop peripheral neuropathy -- the leading cause of lower limb amputation. Oral and intravenous ALA is approved for use in Germany for treatment of diabetic neuropathy and in the U.S., research has shown that ALA may be helpful in treating nerve damage in diabetics and in cancer patients [source: American Cancer Society].

In a clinical trial, diabetic patients suffering from peripheral neuropathy who were given 200 mg of ALA intravenously for 21 days reported a reduction in pain. A larger study of diabetics with peripheral neuropathy who were injected with 600 mg of ALA a day for three weeks, followed by 12 weeks of oral supplements, also experienced relief [source: Larsen].

A small study in Austria found that more than half of the cancer patients who took ALA after getting the chemotherapy drug oxaliplatin reported an improvement in neuropathy symptoms [source: American Cancer Society]. The National Cancer Institute is currently conducting a phase-3 study on ALA's use in preventing peripheral neuropathy in cancer patients undergoing chemotherapy treatment [source: Higdon, American Cancer Society].

To learn more on how ALA could improve your health, visit the links on the following page.

In 2007, the FDA established new regulations to improve the consistency and safety of dietary supplements. Manufacturers are required to comply with the new standards by 2010, including making sure the supplements don't contain contaminants or impurities and are properly labeled [source: American Cancer Society].