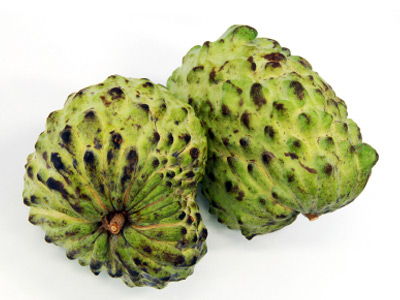 No matter what you call it -- guanábana, custard apple, cherimoya or Brazilian paw paw (our favorite) -- this plant has a long history of medicinal use.
iStockphoto/Hien Nguyen

­Graviola is the ­Portuguese name for a plant that is widely grown and consumed in Latin America. In Spanish-speaking countries, the fruit is called guanábana. Common names for it are soursop, custard apple, cherimoya, and Brazilian paw paw. By whatever name, this tropical evergreen tree produces a fruit with white flesh, many large seeds and an extremely sweet, slightly acidic flavor. Because it is difficult to eat, its pulp is commonly made into juice. In fact, your local grocery store probably sells the popular guanábana nectar.

Not only the fruit but also other parts of this plant -- the leaves, stem, bark, roots, and seeds -- have a long history of medicinal use in the Americas. Graviola is used as a natural remedy for infections, fever, digestive problems and high blood pressure [source: Cassileth]. Researchers have documented many other traditional uses among the indigenous people of the Andes, the Amazon and the Caribbean [source: Taylor].

­Recently, scientists have begun to explore the potential of the bioactive chemicals in graviola leaves, stems and seeds, called annonaceous acetogenins. These acetogenins appear to have powerful anti-tumor and anti-cancer qualities. Some test-tube studies have concluded that graviola compounds may be able to target and kill cancer cells, even drug-resistant ones, without interfering with healthy cells. These results, circulated through alternative medicine networks and on the Internet, have created considerable excitement and a measure of hype. Natural health guru Andrew Weil is among those who are skeptical of the claims made for graviola and recommends against its use [source: Weil]. It may take years before clinical trials are conducted to legitimate or disprove the claims made by graviola proponents. In the meantime, the plant has hit the herbal market and many cancer patients are taking it.

This article will attempt to cut through the controversy regarding this form of alternative medicine, its known uses and current research.