How can a foot rub help you recover from surgery? 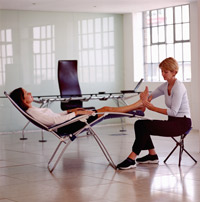 Reflexology splits the body into zones. Those zones correspond to specific areas of the foot.
Image Source/Getty Images

Reflexology is based on an intricate, controversial theory that puts the control center for the whole body in our hands and feet.

In evolutionary terms, it makes sense that the body's responses might be connected to the feet. The instinctive fight-or-flight response requires quick foot action if the brain decides that flight is the path to survival.

Reflexology is somewhat similar to acupressure but probably less well-known. It has been around for just as long, perhaps as early at 2700 B.C. in China [source: RRP]. Reflexology divides the body into "zones" instead of acupressure's "meridians." The 10 zones start at the top of the head and divide the body into equal sections down to the feet. Each of those 10 zones has a corresponding area on the foot.

A good way to understand this discipline is to think of a marionette. In a marionette puppet, each piece of the body is connected to a string, and each of those strings is attached to one of two control mechanisms. The puppeteer can move every part of the puppet's body by manipulating those two mechanisms.

In reflexology, those control strings run from each part of the body -- joints, organs, muscles, everything -- to the feet. Manipulating specific points on the foot can manipulate the condition of each piece of the human body. One study published on the Reflexology Association of America (RAA) Web site says reflexive foot massage can reduce the need for pain medication after surgery by more than 50 percent [source: RAA]. That's a pretty amazing foot rub. It almost calls to mind a voodoo doll with Vicodin-tipped needles stuck in its feet. But according to reflexology's practitioners, it's entirely scientific.

They say that every nerve line in the body ends in the feet. According to the RAA, each foot has 7,200 nerve endings in it [source: RAA]. And while reflexology practitioners sometimes talk about manipulating "energy," the basic theory seems to rest with these nerve endings.

Let's say a patient just had heart surgery. This type of surgery would affect, say, the heart, the chest cavity, and lots of other body parts in the surgical vicinity. After surgery, the patient is going to be experiencing significant pain in those areas. How would a reflexive foot massage address that pain?