How can a foot rub help you recover from surgery?

Nerves and Crystals in Reflexology 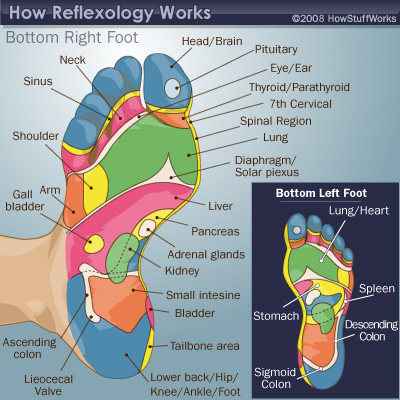 This illustration and the one below are versions of a reflexology foot chart.
HSW 2008

According to reflexology, the nerves that carry signals to and from those body parts have representatives in the feet. The heart, for instance, can be addressed by putting pressure on the ball of the left foot. The left foot corresponds with the left side of the body, and the right foot talks to the right side. To get at the pain in the chest, a practitioner would manipulate the center tops of each foot, just below the toes.

Here's where it gets a bit more complicated. Pain is a product of nerves. Very simply stated, the nerves in that heart patient's chest cavity send a signal to the brain telling it something is wrong, and the brain, in turn, sends back a signal that tells the chest it should hurt very badly. And then it does. One theory of reflexology assumes that these nerve pathways to the brain can carry a limited number of signals -- kind of like an Internet connection has only a certain amount of bandwidth. When a reflexologist applies the right amount of pressure to the ball of the left foot, that pressure is going to generate nerve signals, too.

If the pathways can only carry so many nerve signals at a time, then, in theory at least, creating nerve signals that must travel from the foot to the brain might temporarily block the travels of the pain signals. And, in theory, if the pressure is applied to the part of the foot that reaches all the way to the heart, the pain signals originating in the heart would be blocked [source: RAA].

Another part of the theory states that when muscles tense up, such as after surgery, blood circulation slows, allowing toxic crystals to form in the blood. These crystals travel to end of the line, the feet, and from there, they get in the way of normal nerve impulses, resulting in discomfort. By pressing reflex buttons, a reflexologist can break up those crystals [source: RAA].

The medical community doesn't typically back up this line of reasoning, primarily because no scientific research has proved that any part of the foot corresponds to any part of the body. So theories that build on that foundation have a hard time gaining acceptance.

Still, a study published in the 2006 edition of the journal for the Reflexology Association of America notes some dramatic results. Sixty adult postsurgery patients were divided into two groups: a control group that didn't receive reflexive foot massage, and an experimental group that did. The results showed a decrease both in pain score (how the patients rated their own pain) and in the required amount of pain medication, with medication needs down by more than 50 percent [source: RAA].

These results aren't replicated, and it's hard to prove that reflexology is the cause for the pain reduction. It could simply be that a reflexive foot massage feels a lot like a regular foot massage. In that case, the relaxation, stress relief, increased circulation and sense of calm that come from massage therapy in general could have caused those patients to experience less pain.

For more information on reflexology and other complementary therapies, go to the links below.

Reflexology: Bogus, Beneficial or a Bit of Both?
Will getting a pedicure help you go into labor?
Aromatherapy Massages: How do they work?