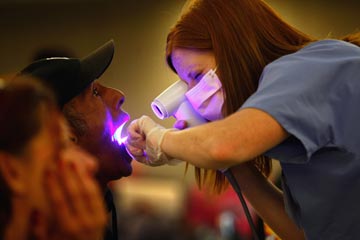 For anyone who is a baseball fan, the images of major leaguers with cheeks swollen from a mouthful of chewing tobacco are indelible. So was that of Gruen Von Behrens, who was 32 years old when he testified before a congressional subcommittee in 2010. Behrens, who started using smokeless tobacco at age 13 to emulate his baseball heroes, had already endured 34 surgeries to treat his mouth cancer -- surgeries that claimed part of his tongue, his lower jaw and half of his neck muscles. His face literally looked like it had been caved in.

Like many forms of this dreaded disease, oral cancer -- commonly referred to as mouth cancer -- can have a devastating impact on its victims. Survivors often bear the scars of repeated surgeries, radiation treatment and chemotherapy, and those scars can be much more debilitating because they're often highly visible. Yet the survivors can count themselves fortunate, because oral cancer can be fatal.

Oral cancer is also prevalent. According to American Cancer Society statistics, more than 36,000 people were diagnosed with the disease in 2010, and almost 8,000 deaths were directly attributed to mouth cancer. The Oral Cancer Foundation (OCF) estimates that more than $3 billion is spent annually in the United States to treat head and neck cancers.

The renegade cells that form malignant tumors can attack healthy tissues in the oral cavity, which includes the lips, the lining inside the lips and cheeks (also known as the buccal mucosa), the bottom or floor of the mouth underneath the tongue, the front two-thirds of the tongue, the top of the mouth (or hard palate), the soft back of the mouth (uvula), teeth, gums and salivary glands.

The mouth is an area that's particularly susceptible to infection, since it's an open gateway to the rest of the body. In fact, roughly 90 percent of oral cancers develop in the lining of the mouth (called the squamous cells), which comes into contact with almost everything we ingest or inhale [source: Granick]. With the oral cavity's proximity to the lymph nodes in the neck, and the ability of the lymphatic system to spread cancer, undiagnosed oral cancer can quickly become deadly.

For that reason, there are several risk factors to be aware of. Tobacco, which is a well-known carcinogen, can damage these cells in all forms, whether in a gaseous form (such as cigarette, cigar, and pipe smoke) or solid varieties, such as snuff or chewing tobacco. According to the American Cancer Society, more than 90 percent of all oral cancer cases can be attributed to some form of tobacco use.

Frequent alcohol consumption is another red flag. And when alcohol and tobacco use are combined, the risk of contracting oral cancer is believed to be more than 100 times greater than those who don't use either [source: Granick].

Men are twice as likely to develop mouth cancer compared to women, probably because they're more likely to consume tobacco and alcohol in greater doses and over longer periods of time. Age is also a factor, especially after 35. American Cancer Society statistics reveal that half of all oral cancer cases are found in patients 62 and older.

Additional risk factors include prolonged exposure to the sun, an inadequate diet without proper levels of fruits and vegetables and HPV (human papilloma virus) infection -- which has been linked to oral sex and multiple partners. Also talk to your physician about any family history of cancer.

What are some early signs of mouth cancer?

Given the destructive effects of oral cancer, detecting the disease in its early stages can be crucial to effective treatment. The motto "better safe than sorry" applies, especially if you know that you're in a high-risk category to begin with. Routine oral self exams and regular visits to the dentist can be invaluable in detecting early signs of mouth cancer.

According to the Oral Cancer Foundation, the death rate associated with mouth cancer has been historically high because the cancer is routinely found in the late stages of its development. Many cases of mouth cancer aren't discovered until the disease has moved, or metastasized, to another location -- typically the lymphatic system in the neck. These cases of more advanced-stage mouth cancer require much more invasive treatment, and have a less optimistic prognosis.

A quick visual inspection can also reveal several precancerous conditions, such as white spots or patches on the mouth (leukoplakia), red spots or patches which are sometimes raised and bleed easily (erythroplakia) or a combination of both (erythroleukoplakia).

Other well-established signs of mouth cancer include persistent ear ache, abnormal lumps or swelling in the soft tissue of the cheek, neck or gums, loose teeth, painful swallowing, abnormal bleeding and difficulty moving the tongue or jaw. If you have dentures or any other dental apparatus, be mindful if they no longer fit correctly. Sudden and inexplicable weight loss is another warning sign.

A medical professional should inspect any condition such as a sore or discolored area of your mouth that doesn't heal within two weeks. To increase the odds of early detection, the American Cancer Society recommends that primary care doctors and dentists examine the mouth and throat during any routine cancer screenings or check-ups. If an abnormal area is discovered, the doctor or dentist might do a biopsy -- removal of a small tissue sample -- for further analysis.

What are your options for testing and treatment?

Why is early detection critical?

If you've been diagnosed with oral cancer, don't panic. Though the "Big C" is fraught with menace, the best approach is to tackle the disease head-on with a clear focus and the support of your health team. Depression is often a side effect of a cancer diagnosis, and that can lead to inaction.

First and foremost, if you still use tobacco and alcohol products, seek help in quitting immediately. On the medical side, treatment can involve surgery to remove the cancerous growth, chemotherapy, radiation treatments or a combination of all three. Typically, oral cancer requires a multi-disciplinary approach, involving oral surgeons, radiation and chemotherapy oncologists, dental experts and rehabilitation staff, as well as the possibility of plastic surgeons.

The first step for your medical team is to determine the extent of the cancer, and whether it has spread. This may entail X-rays, CT scans or MRI (magnetic resonance imaging). Based on those assessments, your doctors will determine a plan of attack. Typically, in the case of oral cancer, surgery is required to remove the tumor and any surrounding cancerous tissue, including lymph nodes.

The surgery may also be done in conjunction with radiation therapy to ensure the localized cancer cells are eradicated (using high-energy rays). Chemotherapy involves the use of cancer-killing drugs, which are usually administered directly into the bloodstream via injection. Both treatments can have severe side effects, however, and it's advised that you discuss any potential problems with your physician beforehand.

Post-surgery treatment depends on the severity of the cancer and how invasive it was. Patients may require reconstructive surgery (commonly known as plastic surgery) to rebuild the damaged tissue and bones. Since oral cancer can also attack the jawbone and soft tissue that holds teeth in place, dental implants plus tissue and bone grafts are a possibility.

Oral cancer can also affect a patient's ability to speak, chew and swallow (particularly if the tongue was impacted and/or partially removed) -- a condition that would require the assistance of a speech therapist.

Overall health is important, too. Cancer patients need to fortify themselves to recover not only from the cancer, but also from the necessarily invasive treatments. Proper nutrition, adequate rest, and an appropriate exercise regimen are critical components in making sure you have the energy to recover fully.

According to the Oral Cancer Foundation, patients need to be aware that oral cancer has a propensity for "developing second, primary tumors." That means it tends to come back. Vigilance is vital, as are adjustments to diet, and high-risk behavior (tobacco and alcohol use).

Want to know more about oral cancer? We have lots more information on the next page.

A False Sense of Security

Don't be fooled into thinking you're not a potential cancer victim. The disease doesn't discriminate. More than 25 percent of all oral cancers cases happen to people who don't smoke and who only drink alcohol occasionally [source: WebMD].

Cancer: What You Need to Know
Does Biotene cure dry mouth?
How does brushing your teeth affect your health?

What in the World Are Tonsil Stones?
Why is there a metallic taste in my mouth?
Teeth Veneers