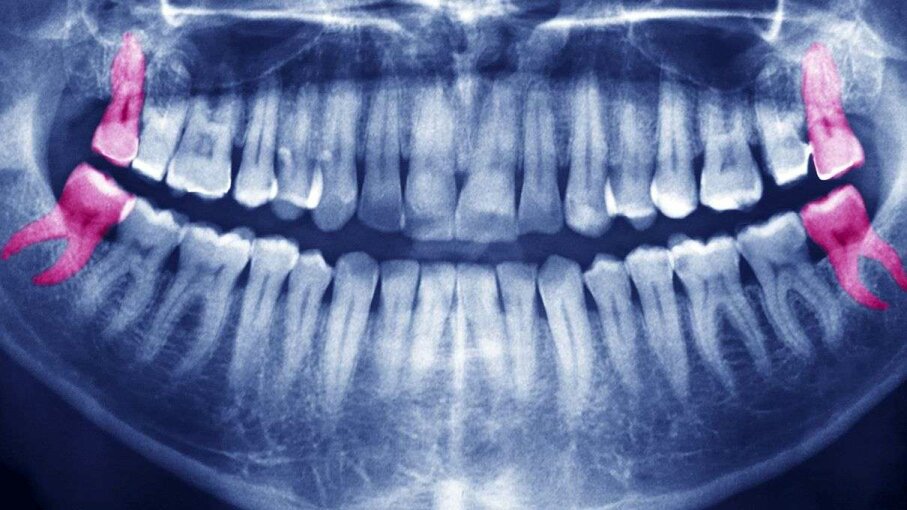 This panoramic X-ray highlights four wisdom teeth in a patient's mouth. If they're healthy, there may be no need to pull them. Instead patients and their dentists may want to consider keeping a regular eye on them. BSIP/UIG via Getty Image

Each year in the U.S., dentists and oral surgeons extract millions of wisdom teeth showing no signs of disease. It's standard, preventive practice — and the subject of a decades-long controversy that questions the medical legitimacy of all that surgery.

So when the American Association of Oral and Maxillofacial Surgeons issued a new position statement on wisdom teeth in 2016, it was a clear response to its critics. The longtime proponent of prophylactic extraction seems to have caved, at least on paper, on the topic of healthy wisdom teeth.

There's no doubt wisdom teeth can be problematic. Technically "third molars," they're the last four teeth to emerge — or not, as the case may be – typically showing up between the ages of 17 and 25, if only on X-ray. Not everyone has all four, and a handful of people don't have any. They're the lucky ones.

The problem is lack of space: The average human jaw is just too small to comfortably accommodate a third set of molars.

They used to fit just fine, according to LiveScience. But when the human brain went through its huge evolutionary growth, the jaw had to narrow to accommodate the new skull shape, while the number of teeth remained unchanged.

Trying to squeeze 12 molars into a jaw that reached ideal capacity at eight can lead to unpleasant outcomes, including cysts, gum disease, tumors, infections, decay, damage to surrounding teeth and the jawbone and, of course, dental-level pain.

These are all signs of diseased wisdom teeth. Everyone agrees these teeth have to come out. It's the non-diseased teeth that raise questions.

Non-diseased is not the same as asymptomatic, notes Dr. Thomas B. Dodson, professor and chair of the Department of Oral and Maxillofacial Surgery at the University of Washington School of Dentistry. Just because it doesn't hurt doesn't mean it's healthy.

"Many people woke up this morning with asymptomatic cancer or asymptomatic heart disease," Dodson writes in an email. Symptoms, like a notable lump or a heart attack, may not show up for years.

"The oldest person for whom I removed wisdom teeth was 93 years old. It was not fun for either of us."
Thomas B. Dodson, Professor and Chair, Department of Oral and Maxillofacial Surgery, University of Washington School of Dentistry

"I see many patients with third molars who report no symptoms. On physical or radiographic examination, I diagnose disease," he says.

Dodson once saw a 50-year-old patient for a lip lesion, X-rayed the patient's mouth and ended up in the operating room repairing jaw damage caused by a wisdom tooth the patient didn't even know was there.

But some wisdom teeth are healthy. They're functional, cleanable and fully emerged. Others are impacted — stuck in the jaw or gums because there's not enough room to emerge — but not causing any problems. The practice of prophylactic extraction draws on the premise that over time, these teeth will probably become diseased and/or cause crowding, forcing other teeth to twist and overlap.

Dodson believes the premise is valid.

"Based on a systematic review of the published literature," he says, "the risk of future extraction of one or more retained wisdom teeth is estimated to be up to 60 percent by the time someone reaches the age of 38."

The risk of disease decreases after that, but "it never goes away. The oldest person for whom I removed wisdom teeth was 93 years old. It was not fun for either of us."

The longer wisdom teeth stay in, rooting themselves in the jaw, the harder they are to remove. Thus the recommendation not only to extract, but to do it early.

But not everyone agrees with the basic premise that wisdom teeth are bound to cause problems. Dr. Jay Friedman, retired dentist and 40-year crusader against prophylactic extraction, utterly rejects it.

"Based on research studies done by oral surgeons themselves, about 12 percent of third molars may eventually cause some problems," Friedman writes in an email. For comparison, he notes in a 2007 journal article that the likelihood of an appendix eventually causing problems is about 10 percent.

Friedman says another 8 percent to 10 percent of teeth may cause significant pain as they erupt through the gums, adding up to "an evidence-basis for the removal of no more than 20 percent of wisdom teeth."

"In other words," he says, "80 percent of third molar extractions represents ... functionally unnecessary or remunerative surgery."

In that 2007 paper, Friedman puts the annual cost of U.S. wisdom-teeth surgery at $3 billion.

He also points out the surgery comes with risks. While relatively minor and typically performed in an outpatient setting, it's still surgery. Negative outcomes from the anesthesia are a possibility, as is post-operative infection. Some patients end up with paresthesia, a numbness or tingling of the lips and tongue, and sometimes it's permanent.

Ultimately, Friedman is in the "If it ain't broke, don't fix it" camp, and he recommends patients ask a lot of questions before agreeing to prophylactic extraction. They should understand the specific reasons for the recommendation, ask for evidence of those reasons and get clear information on the pros and cons of retaining the teeth.

"The decision to remove ... or retain ... an asymptomatic, disease-free third molar should be the patient's choice after a careful and thoughtful review of the risks and benefits of both treatment options," Dodson writes. But, he says, patients should not mistake a decision to retain with a decision to ignore. Rather, it's a decision to treat non-operatively.

"If patients elect to retain their wisdom teeth, the risk of future disease is high enough to warrant active surveillance as the recommended management strategy," Dodson explains. That means regular exams to check for symptoms and signs of disease. It means close monitoring. It means X-rays.

Active surveillance is the approach the AAOMS now recommends for healthy wisdom teeth, but Friedman isn't buying it.

"I can take credit for AAOMS's supposed revision," he writes, "but the revision does not represent a real change ... AAOMS continues to overstate the problems with third molars."

The new position, Friedman says, is "a continuation of the same old scam."

Dodson has a different take.

"[It is] to the organization's credit," he says, "that after a careful review of the literature, AAOMS has adopted a broader view of various treatment options for third molars."

How the new guidelines affect what dentists and surgeons recommend to their patients remains to be seen.

Now That's Beneficial
Fewer wisdom teeth may equal more offspring: A 2013 study suggests a lower incidence of third molars among certain populations, like the Inuit, may be the result of nature selecting for a mutation that avoids the associated pain, which could reduce the desire to copulate.