What is tooth powder?

by Marie Willsey
NEXT PAGE 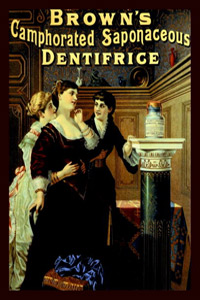 An advertisement for Brown's Camphorated Saponaceous Dentifrice, circa 1900.
Buyenlarge/Getty Images

You know what toothpaste is. After all, you use it every morning -- or at the very least, you should. It seems as if toothpaste has been hanging around our medicine cabinets forever, but it may surprise you to learn that people didn't always use the minty fresh paste we keep in our bathrooms.

It's a little harder to find than it once was, but tooth powder once reigned as the tooth cleanser du jour. It's usually made from three key ingredients: a mild abrasive, such as finely powdered chalk; a detergent; and a flavoring or sweetening agent, such as sugar or artificial sweetener, peppermint, cinnamon or clove. Tooth powders may also include agents used to bind, add color or prevent hardening. It's usually applied with a dampened brush, but in a pinch, your finger or even a small stick will do.

Long before the days of Cleopatra, Egyptians were using tooth powders or pastes to clean their teeth, as did the ancient Greeks and Romans. The Egyptians used a formula combining a powder of ox hooves' ashes and burnt eggshells mixed with pumice. The Greeks and Romans preferred a grittier powder, so they used crushed bones and oyster shells. Romans added powdered charcoal and bark, hoping to help with bad breath. The Chinese added ginseng, herbs and salt to help improve taste and cleaning properties.

The evolution of dental care continued relatively uneventfully until 1000 A.D., when the Persians warned others of the dangers of using overly abrasive powders that could damage teeth. They suggested creating a powder using milder materials such as burnt snail shells, dried animal parts, herbs and honey [source: BBC Home].

Tooth powder, also known as dentifrice, was first marketed in Britain during the 18th century. These powders may have been developed by doctors, dentists, and chemists, but they also included some fairly abrasive substances: brick dust, crushed china, earthenware and cuttlefish. Bicarbonate of soda, commonly known as baking soda, was often a key component. By the end of the century, borax was added to provide a cleansing, foaming effect.

The quality and convenience of teeth cleaning products moved forward significantly during the early 19th century, as the addition of glycerin helped turn the powders into a paste that was easier on teeth and easier to use. By 1873, toothpaste was mass produced and sold in jars on drugstore shelves. In 1892, Dr. Washington Sheffield of Connecticut became the first to put toothpaste into a collapsible tube; his company later became Colgate. After World War II, toothpaste technology continued to develop: One of the most significant advancements was the addition of fluoride to toothpaste to strengthen tooth enamel and help prevent tooth decay. Baking soda had been considered a popular tooth powder because of its cleaning and whitening abilities -- not to mention its low cost. However, modern dentists caution that it's too abrasive for daily use.

Although tooth powders are not widely available today, you can find several brands at your local supermarket or pharmacy, or by special order online. Many travelers, including hikers and campers, prefer tooth powders because they're compact and lighter than pastes.

You can also find recipes to make your own tooth powder. Fortunately, instead of hoof ashes and eggshells, these concoctions rely on relatively easy-to-find ingredients like chalk, powdered sugar, baking soda, borax, charcoal, honey and peppermint oil.

For more information on dental care past and present, see the links below. 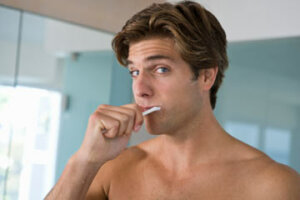 What is tooth soap? 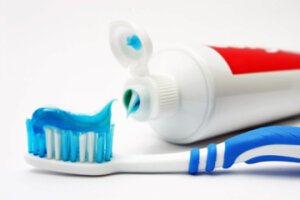 Should everyone use fluoride toothpaste?