Is it possible to be allergic to your own blood? 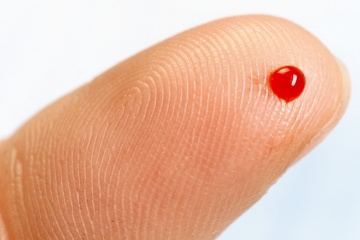 Blood may be an integral part of your body, but it is possible to be allergic to it.
BSIP/UIG via Getty Images

Rhys didn't feel like herself. Normally, she enjoyed her work and was happy to spend her days coding for a thriving tech startup. But lately, she had trouble focusing. And when it came to creative problem-solving, forget it. She couldn't wrap her mind around the issues, let alone the answers.

Frustrated by her mental fatigue and the exhaustion she felt deep in her bones, Rhys lashed out at her co-workers and friends. She thought a workout at the gym might help but could barely do a few reps before giving up. She returned home, her head beginning to throb, and didn't plan to move from the couch for hours.

In general, when a person is allergic to her own blood, it stems from an overactive immune response. A person's body will mistakenly create antibodies to fight the proteins, called antigens, found on the surface of red blood cells. When the body declares war like this, healthy red blood cells are perceived as a threat to the immune system and are destroyed far too quickly.

Normally, a person's red blood cells have about a 120-day lifespan before they are flushed from the body by the spleen and liver. In Rhys' case, however, her red blood cells are destroyed too fast, causing unstable emotional and physical changes. Not only is Rhys constantly tired and frustrated, but as she becomes increasingly anemic, she is pale, dizzy and short of breath. Thankfully, regular visits to her physician and prescribed steroid treatments eventually help mitigate her allergy.

Another condition in which people are essentially allergic to their own blood is called immune thrombocytopenic purpura. While the exact cause is unknown, it occurs when antibodies attack platelets in the blood.

Platelets are cells that circulate in the blood to help with clotting. The average person has more than 150,000 platelets per microliter of blood, but people with immune thrombocytopenic purpura — which causes platelets to be destroyed constantly — often have fewer than 20,000 platelets per microliter of blood. This greatly increases their risk for uncontrolled bleeding. There's no cure for immune thrombocytopenic purpura, but there are treatments, such as corticosteroids (medication to reduce allergic reactions) or spleen removal [source: Mayo Clinic].

While it seems unlikely, it's entirely possible to be allergic to your own blood. Fortunately, there are also treatments to help ease the symptoms, making these conditions more manageable.

How Blood Works
How Allergies Work
5 Explanations for Bleeding Gums

What are some yogurt allergy symptoms?
Is there a connection between fish allergies and omega 3?
What are symptoms of egg allergies in children?