Do Injuries Cause Cancer? 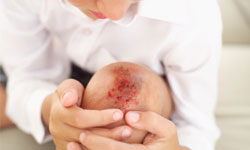 Could injuries lead to cancer?
Stockbyte/Thinkstock

Cancer Myth 7: Some injuries can cause cancer later in life.

Origin of Myth: This is probably an outdated belief that dates at least back to the 1800s. From that time until the 1920s even some scientists thought cancer was caused by trauma. The belief lived on despite the failure of inducing cancer through trauma in experimental animals, and was perpetuated by the reasonably common experience of people discovering a tumor shortly after an injury.

Apparently, old beliefs die hard because more than one-third of those questioned in the Discovery Health/Prevention survey agreed with the myth that injuries can lead to cancer.

Reality: The fact is that a fall, a bruise or any other injury is almost never the cause of a cancer. Sometimes a person might visit the doctor for an injury and a tumor is found at that time. But the injury did not cause the tumor; it was already there. It's also common for people to pay more attention to an injured part of their body, and some people discover tumors while rubbing a painful area.

In very rare cases, long-standing and/or severe injuries can increase cancer risk, but these account for a small fraction of cancer cases. For example, skin cancer risk is somewhat increased in scars caused by thermal or chemical burns, and chemical burns caused by swallowing caustic liquids are a risk factor for cancer of the esophagus. Such rare exceptions may have given credibility to this myth.

Long-standing infections, however, such as certain forms of hepatitis or the bacteria that contribute to stomach ulcers, lead to more cancers than injuries do.