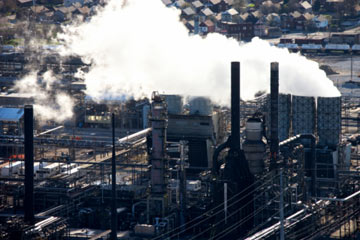 Carcinogens that cause cancer may be all around us, like in the air pollution from this factory in East Chicago, Indiana.
Thinkstock/Thinkstock

By the end of 2010, an estimated 569,490 Americans will have died from cancer. That's more than 1,500 people every day, and 1 out of every 4 deaths in this country [source: American Cancer Society]. So what is giving cancer such a push?

Well, as it turns out, in addition to cancer being hereditary, external factors are at play. For example, about 171,000 of this year's cancer deaths are believed to be caused by tobacco use [source: American Cancer Society]. How is it that external factors like tobacco use can have such a heavy hand in our cancer rates? It all comes down to carcinogens -- cancer-causing agents, like pollutants in the air, ultraviolet (UV) rays and viruses. How and why do carcinogens give cancer the upper hand?

Carcinogens are typically any external causes of cancer, excluding those without a hereditary link. However, for the purpose of this article, we're referring to the following categories of carcinogens from the World Health Organization (WHO):

Exposures to these "agents of evil" can cause some wacky changes to our cells that lead to cancer. For example, some carcinogens can directly cause genetic mutations that foster abnormal cell growth and tumors. Others don't attack our genes directly, but trick our cells into cell division overdrive. That excess division then leads to potential genetic mutations down the road [source: American Cancer Society].

Does this mean that any exposure to a known carcinogen will cause you to develop cancer? The candid answer is, "It depends." For one, our genes are under continual attack by genetic mutations, but our DNA usually does a stellar job of repairing itself. That said, though, that "repairman" skill isn't equal among all of us. Some of us do a better job of repairing our genes than others, which means that some people are more naturally susceptible to the negative effects of a carcinogen. Furthermore, a carcinogen's link to cancer can depend on:

If all of these factors have a role in just how much a carcinogen is linked to cancer, you may be wondering how you can determine what to look out for in your daily life. Or maybe you just want to know what known carcinogens even exist and how we find out about their danger. Advance to the next page to learn how we determine which substances to keep at arm's length.

Determining a Substance's Link to Cancer

Imagine being on the team in charge of figuring out the known carcinogens around us. You wouldn't be able to wrap up your project all neat and tidy, filing it away marked complete. Instead, you would continue to research and refine your list, working on new revisions every couple of years. After all, your research would be linked to potentially preventing cancer, which is a matter of life and death.

In the last government report on carcinogens -- known as the "11th Report on Carcinogens (RoC)" -- 246 substances made it on the list. Of those substances, 58, such as alcoholic beverages, benzene, mustard gas and coal tars, were identified as known human carcinogens, while the other 188 were not as strongly labeled. Instead, they were referred to as "reasonably anticipated" to be substances linked to cancer [source: National Toxicology Program].

So just how does a substance make it on the list? Scientists rely on two different types of studies: lab and epidemiologic. In a laboratory environment, scientists are limited in what they can do, since they can't test on people. Therefore, they have to rely on cell cultures and animal testing. However, even that isn't enough because replicating exposures in people isn't possible, and it's impossible to say that a substance will act the same way in humans as it did in animals. Furthermore, to be able to use small sample groups, scientists must use doses markedly higher than human exposures when testing on animals. So scientists believe that positive carcinogen tests on animals are reasonable predictors of cancer risk and a justified reason to limit human exposure.

In contrast to laboratory studies, epidemiologic studies, also known as population-based studies, take research outside of the lab. In an epidemiologic study, researchers look at a population of people and target potential causes of cancer. The challenge here is that outside of the lab, scientists lose a controlled environment, meaning it's difficult to determine what someone is exposed to and when. Therefore, scientists aim to use the best of both worlds -- lab and epidemiologic studies -- to determine the carcinogens that are potentially life threatening.

And they're certainly life threatening, indeed. In fact, it's believed that 75 to 80 percent of cancer deaths in the United States are due to exposure to carcinogens rather than hereditary links to cancer [source: American Cancer Society]. However, that doesn't mean that we should all hide under a rock; there might be a carcinogen under that rock anyway. Instead, we can take a role in our own protection by limiting our contacts to known carcinogens. For example, staying away from tobacco, limiting alcohol consumption and avoiding too much sun exposure are all wise steps toward prevention. Just remember, keep your wits about you, and there are things you can do to stop some of those carcinogens in their tracks.